For 30 years, Somalia ignored its youth and failed; it is time to give them a chance 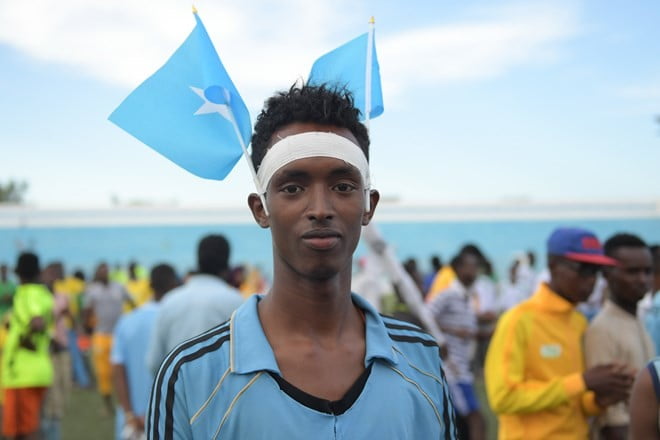 From the 2000 Arta Conference in Djibouti, which gave birth to the 4.5-clan system, to the current fledgeling federal government, Somali youth have been systematically excluded from the country’s political system.

The clan model of governance was meant to be a temporary solution to stop the violence, but it has become an acceptable rule upon which every aspect of our lives is based.

A youth with Somali flag on his head at a ceremony to mark International Sports Day for development and peace in Mogadishu on April 06, 2017. UN Photo / Ilyas Ahmed

About 80% of Somalia’s population is under the age of 35, but their fate is decided by a fraction of tribal elders and some inept older men they select into parliament.

This is despite the fact that young people bear the brunt of decades-long anarchy; they have been used by warring factions and tricked into extremist groups while many others fled the country and ended up in the hands of human traffickers in Libya or died in the Mediterranean Sea.

Although insecurity is a vital push factor, there are institutionalised challenges that young people hardly manage to navigate in Somalia.

Yet instead of investing in long-term solutions and allowing youth to sit at the decision-making table, successive governments have all adopted short-term ‘NGO-style’ campaigns. Ads By GoogleThose approaches have not only dehumanised our youth but have also killed their spirit and potential.

If you look at the federal budget allocated to the ministry of youth and sports, you would see where we fit in the government’s priority index. It has always been one of the lowest.

The National Youth Policy, which provides a legal framework for youth to advance their priorities, is still pending approval by the parliament. Yet another disappointing fact that shows lack of interest and political will from those in power. It shows how youth are forgotten.

The UN should also take responsibility for failing the Somali youth despite spending millions of dollars in their name. After all these years and resources, do we have any substantial result in policy change or proper representation?

The answer is NO, but buried in their galleries are a plethora of colourful photos, reports that no one reads and videos showing billboards, workshops and campaigns, which generally take place during calendar events. Is this what we want? Would this empower us to obtain a seat in parliament?

Why did the international community fail to put enough political pressure on the government to facilitate a space for youth in the state-building process?

Why not use the same leverage that pushed for women’s 30% quota in the National Assembly? Credit rightly goes to the strong Somali women who have been relentlessly fighting for their rights. Still, it is worth noting that pressure from donors who fund these so-called clan “elections” have also played a significant role in making the quota system a reality.

It is clear that the old traditional ways of doing things have failed and it is clear that our older generation is not going to give us a space to shape our future.

And there is a long way before Somalia achieves the universal suffrage of one-man-one-vote election where youth can get a fair chance to compete for leadership and reclaim their status in society.

Now the ball is in our court. Somali youth should not wait for miracles to happen. We should not accept to be expendable, and we have to stand up and effect change.

We have already proven to be indispensable force; from mediating rival clans in Galk’ayo to establishing and running national emergency coordination centre in Mogadishu during crisis – such as the 14 October Zobe attack – to taking the lead in the fight against Covid-19.

Another formidable power we have is the use of social media for social good. If we don’t have a seat at Villa Somalia, we have a virtual space online where we can exchange ideas, question people in power and hold them to account.

It is time to organise and turn our #Hashtags into a fierce political movement. Even if it means demanding a quota system that reserves parliamentary seats for Somali youth, we have to force our way into the system and together rebuild this great nation in the Horn of Africa. Finally, my message on this special Independence Day is “Dhalinyarooy #FadhigaKakaca”