Somalia the new offshore oil power in the making 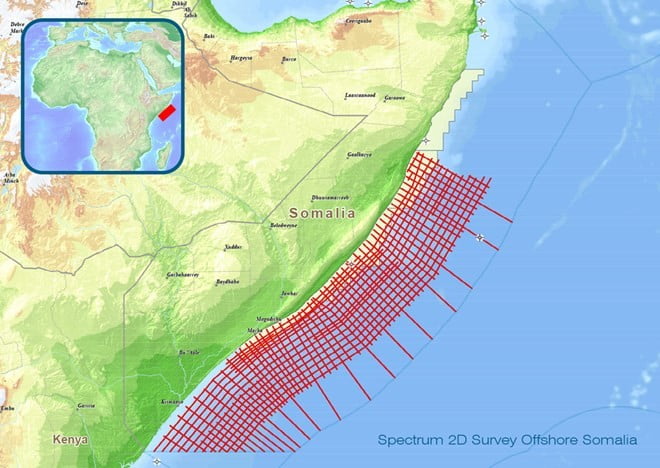 Somalia is one of the few remaining frontier oil and gas exploration territories and the Somalian federal government is promoting its advancement by launching its first ever offshore licensing round. We look at the latest developments.

Since the late 60s, civil unrest has prohibited the exploitation of Somalia’s offshore oil and gas resources. Now, however, after several years of relative peace, the government is making a bid to attract foreign investment to develop the country’s oil and gas riches.

In May, Somalia’s Ministry of Petroleum and Mineral Resources launched its first offshore licensing round, featuring up to seven blocks that can be bid for between August 2020 and March 2021.

According to seismic data processing company Spectrum, which acquired approximately 20,000 km of long-offset 2D seismic data offshore Somalia in 2015, there are strong indications of widespread distribution of good quality source rocks. Meanwhile, another subsurface data company, TGS, estimates un-risked resources for the Somali Basin could be around 30 billion barrels of oil. TGS has acquired more than 40,000 kilometres of 2D data, which covers the seven blocks on offer,

Overall, the country, located in the Horn of Africa and bordered by Kenya and Ethiopia and close to Yemen, is a promising new frontier for oil exploration; it is not without its risks and challenges though.

Oil and gas exploration started in Somalia in the 1950/60s, with a total of 70 wells drilled, 80% of which were onshore. Many major companies, including ExxonMobil, BP, Texaco, and Shell, were active in the region at the time. In the 60s, before civil unrest stifled the sector, five discoveries were made but all were considered sub-commercial. Ads By GoogleAs such, Somalia, which relies heavily on fossil fuels for its energy supply, does not produce oil. Keen to change this fact,  the government ratified a new Petroleum Law in February, revoking the one passed in 2008.

The law established the Somali National Oil Company, which will participate in petroleum operations, as well as the Somali Petroleum Authority, which will act as a regulatory body overseeing oil and gas activity.

Siva Prasad, senior analyst at Rystad Energy, says that the passing of this law resolved a key barrier to exploration offshore Somalia.

“It created a petroleum authority that can negotiate with international oil companies, which has been a main concern for potential investors,” says Prasad.

After passing the law, Somalia reached an agreement with a Shell/Exxon joint venture (JV) for an initial roadmap to explore and develop potential offshore oil and gas reserves in march. The agreement enables the conversion of old concessions held by the JV, which were previously put into force majeure, to the new production sharing contract. The JV reportedly agreed to pay the government $1.7m for historic leasing of the blocks.

Alessandro Piccoli, technical research principal at IHS Markit, says that the ongoing negotiations between the majors and the authority should be seen as positive.

“Exxon and Shell are currently negotiating with the authority for those blocks, maybe it’s a good sign because otherwise they will just relinquish them and leave the country,” says Piccoli.

He notes there will be an onshore well drilled by Genel Energy in 2021, which he says “will be interesting to follow” because it is said that plays in this basin are similar to a northern Yemeni basin that has proved prolific.

As part of the Petroleum Law, which was passed with the support of the International Monetary Fund, the government has created a new revenue-sharing agreement, which details how future revenues from the development of the industry will be shared between the federal government and the six federal member states.

However, relations between the federal government and the member states are strained and Piccoli says some perceive the new petroleum law as being “imposed” on them.

As such, the positive participation of all the regions in the country remains doubtful, adds Prasad.

“The Republic of Somaliland never took part in any of the discussions leading to the ratification of the law. The Puntland and Jubbaland states also rejected the new law and withdrew from the licensing process. All of this raises questions on the stability and the eventual validity of the Petroleum Law,” says Prasad.

There are other challenges facing the development of Somalia’s oil reserves. Prasad says that the spending cuts announced by companies worldwide amid the Covid-19 pandemic is already taking its toll on exploration in Africa and may also affect the interest of the operators in venturing into the frontier waters of ‘an internally troubled state’.

“Hence it remains to be seen whether the set deadlines will actually hold or get extended, and also if the Petroleum Law gains some stability over the months to come,” he says.

Somalia’s plans have already been disrupted by the coronavirus outbreak. The first offshore licensing round was planned to be a physical roadshow in Houston with 15 blocks on offer. However, it had to be held virtually and the number of blocks were reduced to seven frontier blocks.

“The reduced number of blocks on offer may be in reaction to the exploration spending cuts announced by E&P operators globally,” says Prasad.

The country is also seeing an increasing number of Covid-19 cases.

Future challenges for oil exploration offshore Somalia
Other ongoing issues likely to be monitored closely by operators and potential investors are the postponed election, which was scheduled to take place in March but was delayed due to the coronavirus, and the outcome of an ongoing maritime border dispute between Somalia and neighbouring Kenya. The International Court of Justice will hear the case next year, also postponed due to Covid-19. The main dispute is over three offshore oil and gas blocks currently licensed to Eni and, at present, considered part of Kenya’s territory.

Somalia also represents a corruption risk; it currently ranks the lowest out of 180 countries on the Transparency Initiative Corruption Index.

For now, the industry is waiting to see what happens; will there be much interest in the licencing round come August and will activity go ahead next year as planned? These are some of the key questions.

“We’ll see how people come and go and if they will decide to drill because, for the moment, not much is happening, it’s only planned activity. But Exxon and Shell staying on, that’s quite positive,” concludes Piccoli.