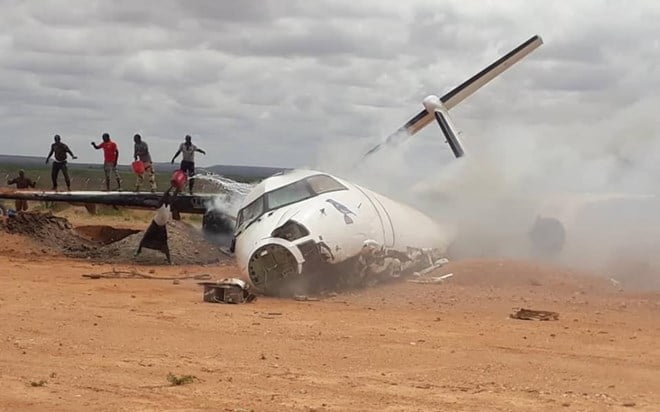 People try to put out a fire caused by a plane crash in Beledweyne  on July 14, 2020. Hiiraan’s governor said the crash may have been caused by a piloting or a mechanical error.

Speaking to Hiiraan Online, Ali Jeyte Osman, the governor of Hiiraan region said the reports were unfounded, adding that the entire airport perimeter is fenced in with barbed wire making the possibility of straying animals trespassing the area nearly impossible.

“The rumours that a donkey wandered on to the airport runway are false, the cause of the crash may have been a piloting error or a mechanical problem,” said the governor.

Osman also told Hiiraan that the aircraft’s cockpit voice recorder (CVR), which preserves the conversation of the pilots, will be able to give investigators a better idea of what transpired in the last few moments before the accident.

The governor’s remarks come as a joint Somali-Kenyan investigation is underway to determine the root cause of the crash.

Although the plane was written off as unsalvageable, the incident caused light injuries to the crew members.

“The plane was from Djibouti earlier this morning, and upon landing a donkey crossed the runway, they hit the donkey and swerved off to a trench on the side of the runway, but the crew are perfectly okay,” Mohamed told the paper.

Osman said that he refrained from making comments about the accident last week when the story first broke because he wanted to see the preliminary findings from the investigation before making any conclusions.

Somalia’s Director of Civil Aviation, Ahmed Moalin Hassan, told HOL that the plane, registration number 5Y-VVU, was chartered by the US Department of Defense in support of the AMISOM mission near the area. He added that the flight manifest suggested that the plane was carrying food supplies.

The crash at Beledweyne marks the fourth aviation accident in Somalia in the last four months.