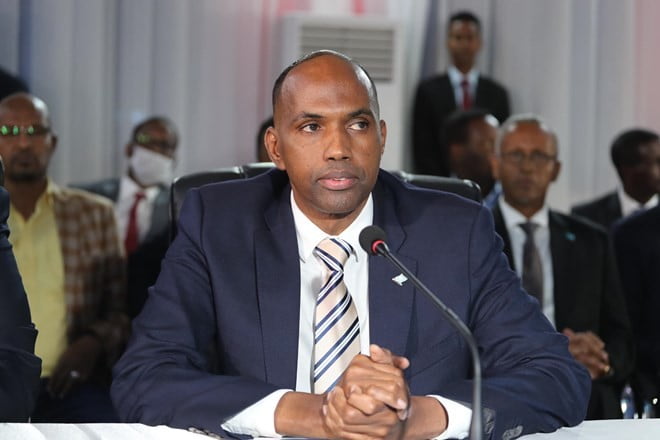 Somalia’s PM Hasan Ali Khaire has been ousted from office in a vote of no confidence motion on Saturday.

The Lower House announced the removal of PM Hassan Ali Khaire from power after holding an extraordinary convention.

At least 200 MP’s have voted in favor of the motion whilst 8 lawmakers have opposed against the PM’s removal from office.

The ousting of Somalia’s PM has plunged the country into electoral turmoil.

Mursal said the vote of no confidence stemmed from the government’s several shortcomings. He cited the inability to table elections on time and for failure to secure the nation.

The vote comes just days after the Prime Minister and President both attended talks with Somalia’s regional leaders in Dhusamareb to discuss the forthcoming election model.

The speaker of Lower House of Somalia’s Federal parliament, Mursal has called on president Farmajo to appoint Khaire’s replacement.

A tweet from the Presidency shortly after the vote noted the President had accepted the decision of the Lower House adding the ‘voice of the of the House of the People is the foundation of our nationhood.’

The president said he will move in to appoint a new prime minister in line with constitutional dictates.

“President Farmajo will immediately appoint a Prime Minister who will form a government that will take the country out of this transitional period and strengthen social services in the country,” the statement read in part.

The Lower House voted 170-8 in favour of a motion to remove the prime minister from office ending a close to full term tenure of Khaire which started in March 2017.

Upon the nomination of a new prime minister, the president will present the name to the Lower House for approval which shall require a simple majority of 50%+1. The PM will appoint a new cabinet which too will require parliamentary approval.

The new prime minister will oversee the transition within the remaining six months before the term of the current government lapses. The new PM will also be instrumental in engaging with Federal Member States in agreeing on a new electoral model.