Could Ethiopia be the next country to fail? It is TIME to WAKE UP NOW ETHIOPIA! 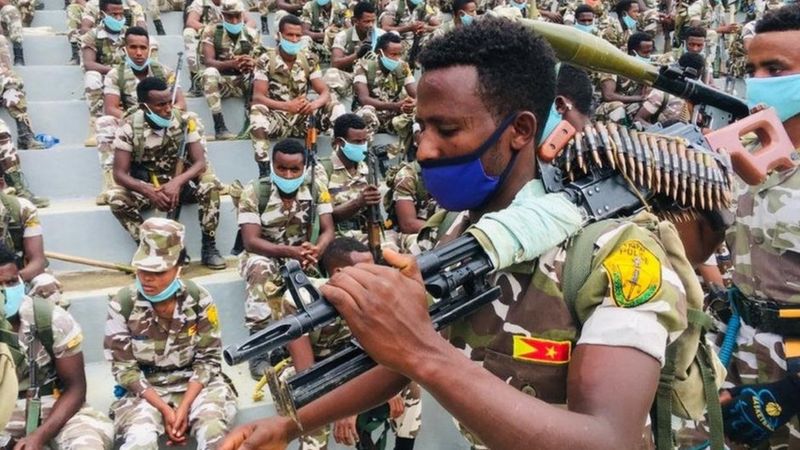 The feud between Ethiopian Prime Minister Abiy Ahmed and the ruling party in the strategically important Tigray region is escalating, raising fears of military confrontation and the break-up of Africa’s second most-populous nation.

The tensions revolve around the regional government’s decision to press ahead with organising its own election for the Tigray parliament on Wednesday, in an unprecedented act of defiance against the federal government.This is the latest sign that Mr Abiy is struggling to retain his reputation as a peace-broker – about a year after he won the Nobel Peace Prize for ending a border war with Eritrea and for his efforts to democratise Ethiopia.About 9,000 people have been arrested in Ethiopia in the deadly clashes which followed the killing of singer Hachalu Hundessa in June, human rights activists say, leading to concerns that there could be a return to the authoritarian rule that the prime minister had promised to end when he took office in 2018.

What is the cause of tensions?

The ruling party in the region, the Tigray People’s Liberation Front (TPLF), sent political shockwaves across Ethiopia, when it announced that elections for a regional parliament would take place despite the federal government and electoral board announcing the postponement of all elections.Since the end of Marxist rule in 1991 and up until recently, the TPLF had been in a ruling coalition of ethnically based parties, each in control of their own region in a federal system. So its disagreement with Mr Abiy is a deep fracture at the very core of power in the country.

The TPLF argued – like opposition groups – that Mr Abiy’s mandate should end this month as the parliamentary terms comes to an end, and the postponement of elections that were supposed to have happened in August, was in breach of the constitution and raised the prospect of Mr Abiy becoming an “illegitimate” ruler.

Mr Abiy’s allies say the electoral commission postponed the election because of the outbreak of coronavirus, and not because the prime minister wants to cling to power, as opposition parties argue.They say that he remains a legitimate ruler, as the federal parliament has extended his term for a further 12 months, by when the threat posed by the pandemic would hopefully recede and elections would be held.

So what is the significance of the TPLF’s decision?

It has raised concern that the TPLF could be laying the groundwork for the creation of a breakaway state, with a parliament and government taking office without the blessing of the federal government.The TPLF maintains that it is committed to keeping the region within Ethiopia, but it will defend “self-rule” and oppose what it calls Mr Abiy’s attempt build a strong “unitary” state.”We will never back down for anyone who is intending to suppress our hard-won right to self-determination and self-rule,” the region’s leader, Debretsion Gebremichael, said last month.

His statement came a few days after regional security forces – armed with AK-47 rifles and RPG rocket launchers – marched in major cities in Tigray, in a display of military might that intensified worries about armed confrontation.”We are ready to pay the necessary price for our peace,” the region’s security office wrote on Facebook on the day of the parade.

What has been Mr Abiy’s government’s response?

It has declared the Tigray elections illegal, saying that only the national electoral board has the power to organise polls.

However, Mr Abiy has ruled out sending federal troops into the region to stop the election, saying it would be “madness” to do so.”The federal government has no intention and interest to attack its own people,” he said on 25 July.But pro-Abiy hardliners, including former army General Kassaye Chemeda, have called for military intervention in Tigray.”The government should plan well, and they should be attacked,” he said in an interview with the government-affiliated Walta TV.The International Crisis Group (ICG) think-tank says that some federal official have raised the possibility of retaliating by taking “punitive” action against the Tigray government – for instance, by withholding financial grants, which amount to half the region’s budget.Responding to a call by the upper house of the federal government to meet on Saturday to discuss Tigray’s election, the regional government warned that any decision to stop or disrupt the regional election is “tantamount to declaration of war”. Furthermore, Tigrayan members of the upper house said they would boycott the meeting.

Why have relations soured so much?

The TPLF – which was extremely influential in the federal government since Marxist rule ended in 1991, with its leader, Meles Zenawi, serving as prime minister from 1995 to 2012 – has keenly felt the loss of power under Mr Abiy.It saw the prime minister’s widely welcomed campaign to end human rights abuses and corruption as a victimisation of TPLF members, especially after senior military and security officers were either purged or arrested soon after Mr Abiy took office in 2018 following mass protests against the former regime.

The TPLF’s influence at the centre weakened even further after Mr Abiy launched the Prosperity Party (PP) – a merger of ethnically-based parties that used to form the ruling coalition.The TPLF refused to join the PP, leaving it without any influence in the federal government for the first time since Marxist rule ended. Mr Abiy sacked some of its members from the cabinet, while others resigned.As a result, the TPLF has increasingly retreated to its regional headquarters, Mekelle, raising concerns that its ties with the rest of Ethiopia were loosening.The federal government crackdown following Hachalu’s killing has also fuelled what some analysts call a siege mentality within the deep-seated ethnic animosity in Ethiopia.

Federal and PP officials accused the TPLF of involvement in Hachalu’s murder, and of “working to destabilise the country”.The TPLF responded by saying that the party was being scapegoated for Mr Abiy’s “incompetent rule” and the “mess created by his administration”.

How serious is the threat of secession?

The TPLF played a pivotal role in the overthrow of the Marxist regime in 1991, and the drafting of the constitution that gives ethnic groups the right to self-determination and their own state.Although the party has never expressed any desire for Tigray to secede, it has always said this right should be respected.

Furthermore, a new opposition party, the Tigray Independence Party (TIP), has emerged to contest the regional election. It describes Ethiopia as an “empire”, and says its prime mission is to secure Tigray’s independence.

Some academics in Tigray are also entertaining the idea of secession. So for the first time since 1991, the topic is on the agenda of mainstream politics in Tigray.Two other Tigray nationalist parties contesting the poll, Salsay Woyane Tigrai and Baytona, say they want the region to have more autonomy to secure its territorial integrity, promote its language, and preserve its heritage.

The TPLF currently controls all the seats in the regional parliament, and the election will be carefully watched to see if the more nationalist and pro-secession parties win some seats to pursue their agenda further.As for Mr Abiy, he has repeatedly said that Ethiopia will “never” disintegrate, indicating that he is confident that he can hold the nation together, despite the ethnic, religious and political violence that has hit different parts of the country, leaving about two million people homeless since he took office.The TPLF says the displaced include about 120,000 Tigrayans, who constitute, according to the 2007 census, around 6% of the population.

What about mediation efforts?

On 16 August, more than 50 religious leaders, elders and prominent personalities travelled from the federal capital, Addis Ababa, to Mekelle city in an attempt to ease tensions. The fruit of their efforts are yet to be seen.The ICG think-tank said “weightier” mediators may be needed.”Prominent African statesmen with strong ties to both the TPLF and Abiy could play this role,” it added.Other analysts say this is vital as the success of Ethiopia’s peace initiative with Eritrea hinges on stability in Tigray.

The region borders Eritrea, and was at the centre of the 1998 war between the two nations.Tens of thousands were killed in the conflict after Eritrea launched an offensive to gain control of the town of Badme from Ethiopia’s Tigray region.

Mr Abiy signed a deal in 2018 with Eritrea’s President Isaias Afwerki to end the “state of war”, resulting in border crossings between the two countries reopening. However, the border crossings are once again shut. The reasons are unclear, but the Ethiopian government at one point said that the two countries were working to establish proper customs posts.Nor has the status of Badme been resolved. Eritrea wants Ethiopia to abide by a UN-backed border commission ruling to hand over the town. But this cannot be achieved without the cooperation of the government in Tigray, as it administers the area.So, the Nobel laureate may find that to achieve lasting peace with Eritrea, he will first need to resolve his differences with the TPLF.

One thought on “Could Ethiopia be the next country to fail? It is TIME to WAKE UP NOW ETHIOPIA!”