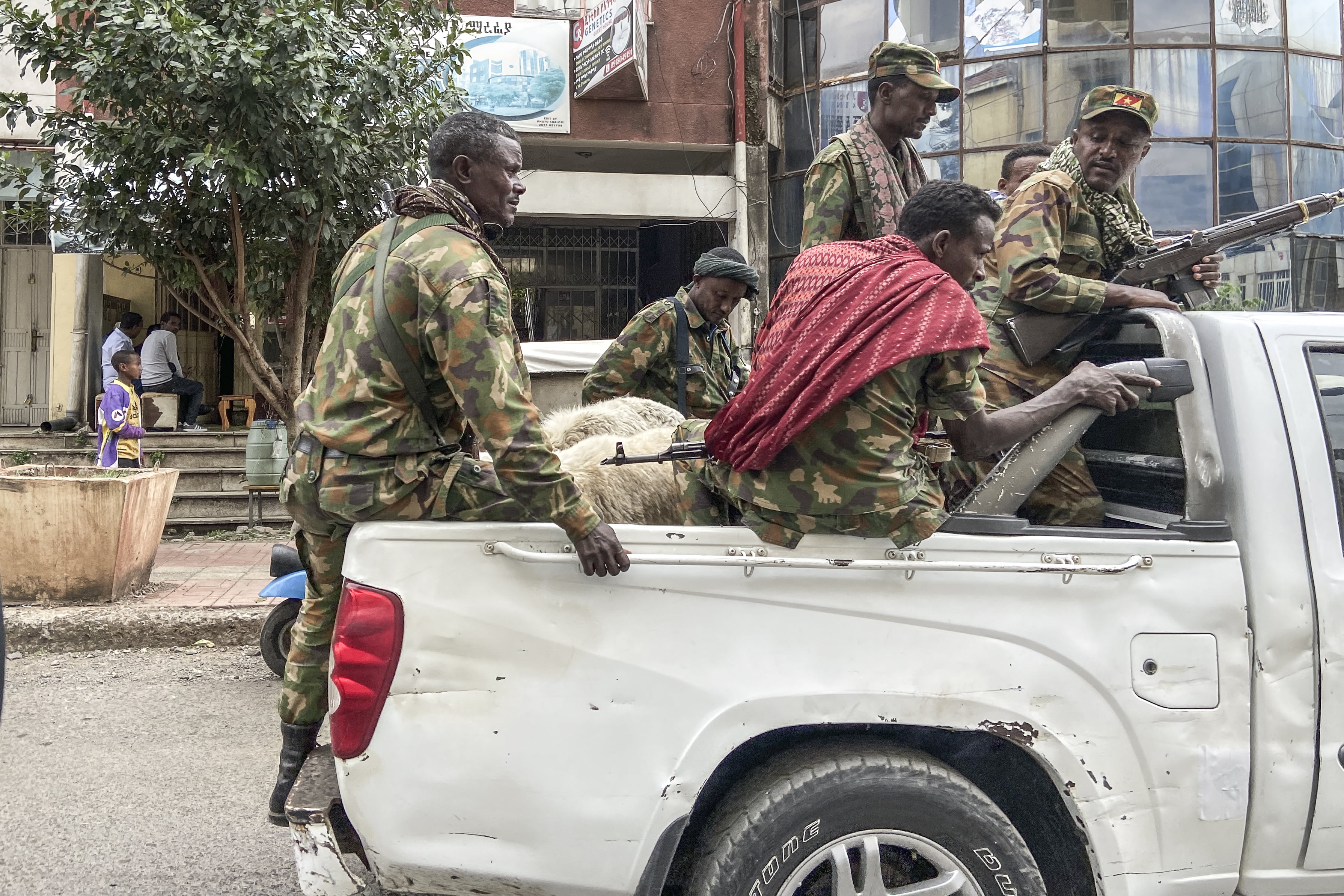 With the Ethiopian government conducting a military offensive in the northern Tigray region, some people have taken the opportunity to spread misinformation online.

This includes material either not directly related to the conflict or, sometimes, altered to make it look like it is.

A manipulated image of a missile defense system 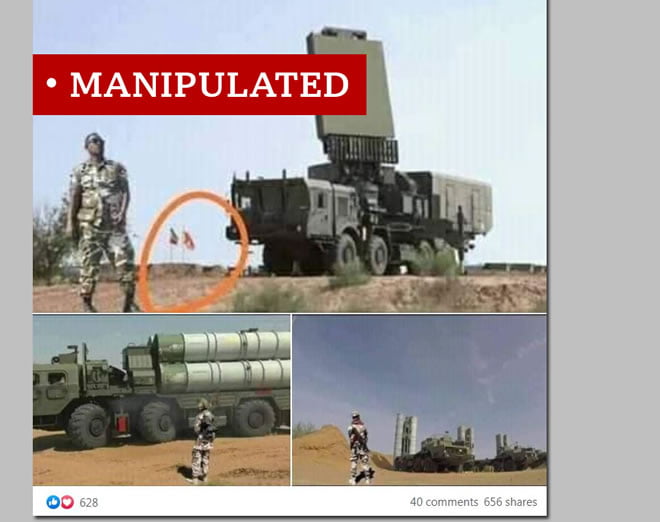 Accompanying text reads: “This weapon you see on the picture, even Ethiopia doesn’t own it as a country.

Some have been sharing photos they say show an S-400 Russian missile defense system, claiming it is in use in the Tigray region to ward off Ethiopian air attacks. They also claim a Russian-made flamethrower system is being used.

“The Tigrayans have it to protect themselves from air strikes.”

The photos each show a soldier in what appears to be the uniform of Tigray special forces, standing nearby.

But these images have been manipulated, with the soldiers added in.

Their shadows are either pointing in the wrong direction when compared with those from other objects or are too dark.

In one of the photos, the soldier is also out of proportion when compared with the background.

An online image search revealed the photos of the weapons system are from military exercises in the Astrakhan region, in southern Russia.

A Russian-language video of that exercise was posted online in September, showing the system in action.

The S-400 is an advanced Russian surface-to-air missile system, which only a few foreign countries have bought.

And Ethiopia is not one of them.

“Ethiopia has never imported an S-300 series or S-400 series… system and neither have any neighbouring countries,” says Justin Bronk, of the Royal United Services Institute (Rusi), in London.

The downed fighter jet not from Ethiopia

Hundreds of Facebook users have been sharing a picture purporting to show a downed Ethiopian military plane burning on the ground.

One post says: “Tigray special forces were attacked from the air.

“They have destroyed one [Ethiopian] fighter jet and killed lots of special-force military (commando).

“The fight is still going on.”

But a reverse image search reveals this picture is not from Ethiopia.

in a July 2018 Iranian-run Press TV report about a Saudi warplane shot down in Yemen.
in a May 2015 Twitter post about a MiG-25 plane near the Libyan city of Zintan 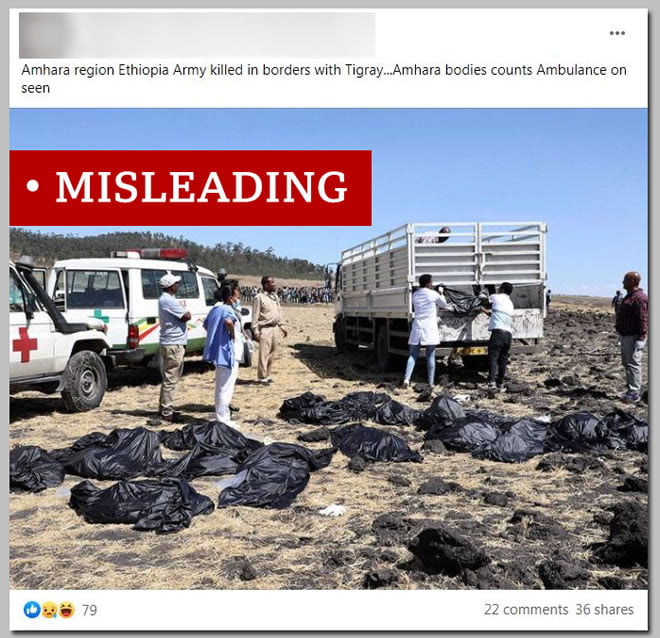 Some have been sharing photos from the site where a civilian Ethiopian Airlines 737 Max 8 crashed killing more than 150 people shortly after take-off from Addis Ababa in March last year.

One was said to show body bags near the Tigray region, containing the remains of soldiers from the neighbouring Amhara region.

But other users pointed out they were nothing to do with the current fighting.

And some have now been deleted. 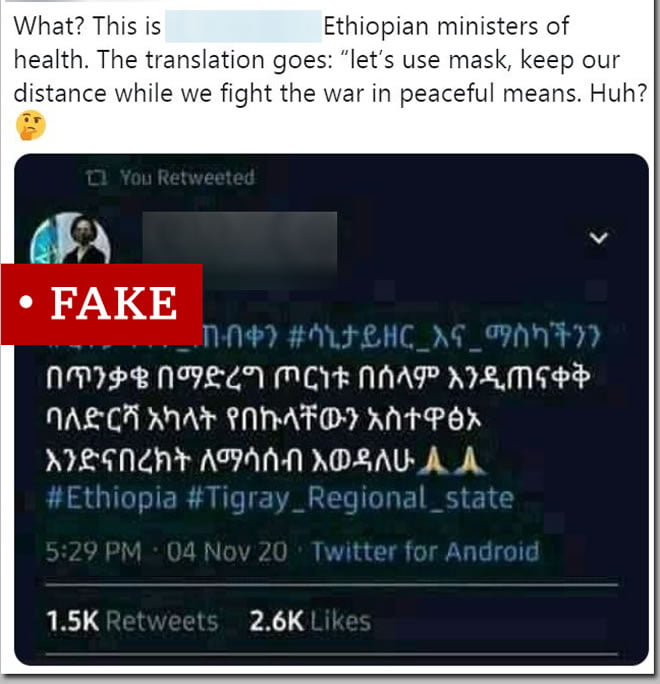 Screenshots of what appears to be a tweet by Health Minister Lia Tadesse have been circulating, mocking her for apparently issuing Covid safety instructions to the military.

The translation of the supposed tweet reads: “With social distancing, sanitiser and wearing our masks properly, let all concerned bodies contribute towards the peaceful end of the war.”

But the screenshot is fabricated.

A look at genuine posts by the minister also shows she posts using an iPhone – and not an Android device as shown in these screenshots.