Hundreds of Innocent Daily Laborers Killed by the Tigray 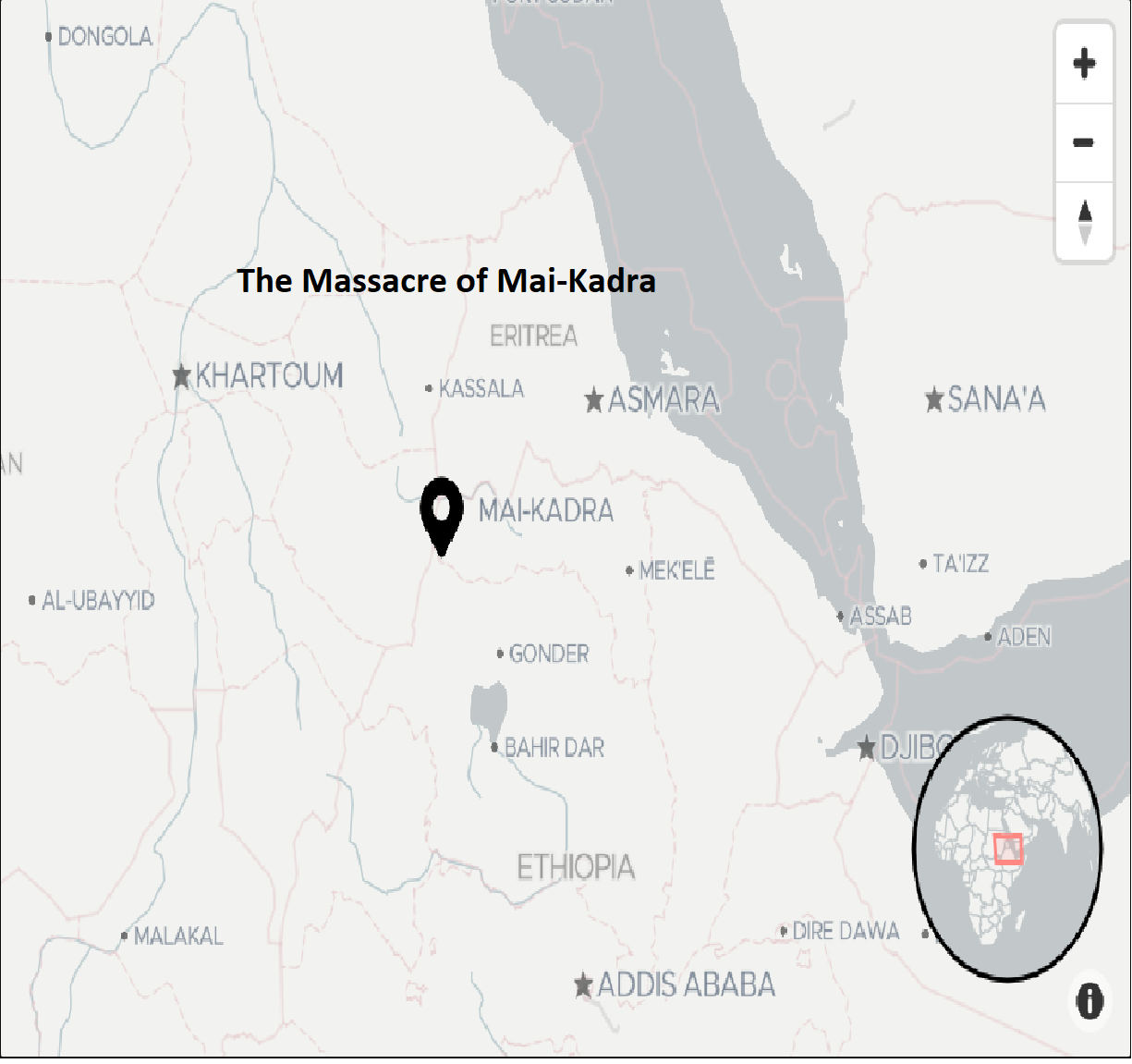 Amnesty International can today confirm that scores, and likely hundreds, of people were stabbed or hacked to death in Mai-Kadra (May Cadera) town in the South West Zone of Ethiopia’s Tigray Region on the night of 9 November.

The organization’s Crisis Evidence Lab has examined and digitally verified gruesome photographs and videos of bodies strewn across the town or being carried away on stretchers. It confirmed the images were recent and using satellite imagery, geolocated them to Mai-Kadra in western Tigray state (14.071008, 36.564681).

“The government must restore all communication to Tigray as an act of accountability and transparency for its military operations in the region, as well as ensure unfettered access to humanitarian organizations and human rights monitors. Amnesty International will regardless continue to use all means available to document and expose violations by all parties to the conflict.”

The organization has also spoken to witnesses, who were providing food and other supplies to the Ethiopian Defense Forces (EDF), who visited the town immediately after the deadly attack, on the morning of 10 November, to find dead bodies strewn all over the town, as well as injured survivors.

Most of the dead bodies were found in the tow​n centre, near the Commercial Bank of Ethiopia, and along a road that exits to the neighbouring Humera town, according to the witnesses and verified images.

People who saw the dead bodies told Amnesty International that they had gaping wounds that appear to have been inflicted by sharp weapons such as knives and machetes, reports which have been confirmed by an independent pathologist commissioned by Amnesty International. Witnesses said there were no signs of gunshot wounds.

The witnesses said that together with the EDF soldiers, they found some wounded people among the dead and took them to nearby hospitals in Abreha-Jira and Gondar, before removing dead bodies from the streets.

“Those wounded told me they were attacked with machetes, axes and knives. You can also tell from the wounds that those who died were attacked by sharp objects. It is horrible and I am really sad that I witnessed this in my life,” one distraught witness said.

Amnesty International has not yet been able to confirm who was responsible for the killings, but has spoken to witnesses who said forces loyal to the Tigray People’s Liberation Front (TPLF) were responsible for the mass killings, apparently after they suffered defeat from the federal EDF forces.

Three people told Amnesty International that survivors of the massacre told them that they were attacked by members of Tigray Special Police Force and other TPLF members.

“There was a military operation by the EDF and Amhara Special Force against the Tigray Special Police and militia at a place called Lugdi during the daytime on 9 November. After they defeated the Tigray forces, the EDF spent the night on the outskirts of Mai-Kadra town. When we entered, we saw a lot of dead bodies, soaked in blood, on the streets and rental dormitories frequented by seasonal workers. The view was really debasing, and I am still in shock struggling to cope with the experience,” a civilian who entered the town after it was retaken by EDF told Amnesty International.When we entered the town, what we saw was devastating. The roads were strewn with dead bodies especially in the centre of the town, and on the road the connects the town to Humera. Civilian who witnessed the aftermath of the massacre

This was corroborated by another who said: “We went to the town immediately after the army and the Amhara Special Force took control of Mai-Kadra town on 10 November around 10 am. The army entered … after encircling the town overnight. There was no exchange of fire for the army to take over the town. But when we entered the town, what we saw was devastating. The roads were strewn with dead bodies especially in the centre of the town, and on the road the connects the town to Humera.”

“The Ethiopian authorities must immediately, thoroughly, impartially and effectively investigate this blatant attack on civilians and bring those responsible to justice in fair trials,” said Deprose Muchena.

“TPLF commanders and officials must make clear to their forces and their supporters that deliberate attacks on civilians are absolutely prohibited and constitute war crimes. All parties in the Tigray conflict must ensure full respect for international humanitarian law and human rights law in their operations.  The safety and protection of civilians must be paramount.”

While the official death toll in Mai-Kadra is not yet known, the Amhara regional government’s media agency AMMA reported there were around 500 victims, adding that they were primarily non-Tigrayan residents of the town. A man who is helping to clear the bodies from the streets told Amnesty International that he had looked at the state-issued identification cards of some victims, and most were Amhara.

On 4 November 2020, Prime Minister Abiy Ahmed ordered the Ethiopian Defense Forces (EDF) to militarily engage with the Tigray Regional Paramilitary Police and militia loyal to the Tigray People Liberation Front (TPLF) in what he stated was a response to multiple attacks by the Tigray security forces on the EDF North Command base in Mekelle and other military camps in Tigray Region.

The Ministry of Defence and the Prime Minister have announced that Ethiopian Air Force planes carried out multiple air strikes against TPLF military installations. The Prime Minister and the Army Chief of Staff pledged to continue air strikes on selected targets without endangering civilian life, advising residents to stay away from ammunition depots and other military targets.

According to the UN Refugee Agency (UNHCR), as of 11 November, some 7,000 refugees had fled western Tigray state into neighboring Sudan.