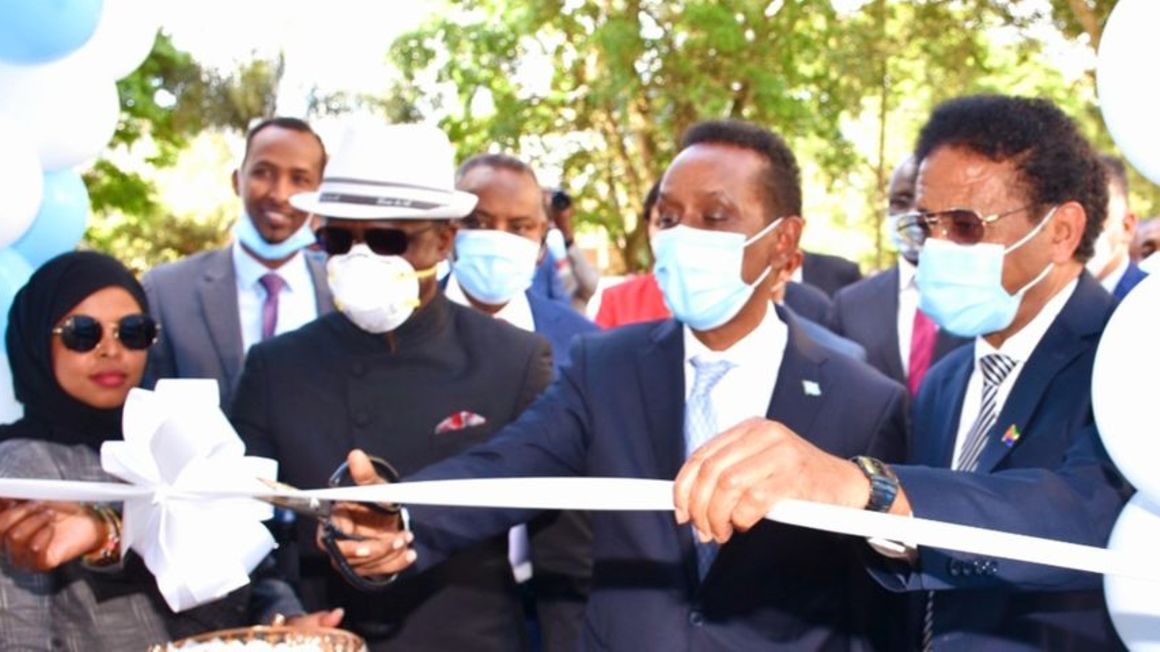 Somalia has reopened its Nairobi embassy premises, 10 years after Mogadishu won a court case against a private Kenyan businessman who had bought it illegally during the civil war.

The premises initially purchased in 1972, in Nairobi’s Westlands area, were renovated over the past two years under the tenure of Somalia Ambassador Mohamoud Ahmed Nur ‘Tarsan’.

The reopening means Somali diplomats will no longer rent their offices in Nairobi.

On Saturday, Kenyan and Somali diplomats gathered at the renovated building to declare “stronger” ties.

“I came here as a Minister for Foreign Affairs, when I was just two days into the job, and promised we would reopen it one day,” said Somali Foreign Affairs Minister Ahmed Isse Awad, who said it had nearly been “stolen from us.”

“This is a sign that Somalia is back. For anyone who doubts that Somalia is going back to its original state, this (reopening) is an example. It is also a symbol of our relationship with Kenya.”

The ceremony came more than a year after the two sides nearly strained contact, each recalling its ambassadors for consultations.

This time round, officials at the event reminisced about old friendly ties and spoke of doing whatever they can to strengthen their relations.

“We are good neighbours and cannot wish each other away. There is so much that brings us together. We confront them any challenges we face like good brothers and sisters,” he told an audience including Somalia’s Foreign Affairs and International Cooperation Minister Ahmed Isse Awad.

The occasion happened just a week after Kenya also inaugurated its own new embassy premises it had built over the past two years with officials saying it will help address concerns affecting each other’s affairs.

“These developments should speak to the very special relations between our two countries,” Mr Namwamba said.

The Embassy premises in Nairobi were, however, only rescued from a possible illegal sale after the High Court in December 2010 ruled the former ambassador under Siad Barre’s regime had sold it illegally.

“This building has been neglected since the collapse of the Somali state in 1991,” said Tarsan, at the function.

The Somali community in Nairobi raised funds to renovate the embassy

As Somalia descended into civil war in early 1990s, the premises were supposedly put on sale by the then ambassador in 1994, probably taking advantage of the lack of authority back home.

A businessman bought it but the Kenyan government later intervened and the matter reached the court in 2005.

A judge in 2010 ruled the embassy, being the Somali government’s property, could not be sold off by an individual, without following due procedure.

Because the Somali government had collapsed then, it was determined that the Kenyan government had the duty to care for the property of a friendly nation until an appropriate authority took over.

At the time the High Court made the decision, a UN-backed transitional government, then under Sheikh Sharif Ahmed, was governing Somalia. The premises were immediately handed over to then Ambassador Mohamed Nur ‘Americo’.

On Saturday, Mr Namwamba told the audience the two sides were working on improving their relations to benefit their respective people, in spite of the other political challenges they face.

“As a friendly brotherly neighbour, Kenyan remains committed to working with Somalia, through the State building process, for a peaceful, secure, prosperous and stable Somalia and the Horn of Africa region,” he said.

“We have a collective responsibility to take care of this neighbourhood.”

Kenya and Somalia have had perceived lukewarm relations in the recent past, especially after Somalia sued Kenya at the International Court of Justice over a maritime boundary in the Indian Ocean.

These days, diplomats from both sides speak of enhancing business opportunities and people-to-people relations.

“Kenyans are our brothers. We have a lot of common interests. We have to think together. Sometimes there may be hiccups but Kenya is our main partner in the whole East Africa,” Tarsan, a former Mayor of Mogadishu, told the audience.

“A huge Somali community lives here and they enjoy full rights to do business and go about their activities. The investments that Somali people hold here are worth more than $5 billion. That kind of relationship cannot be cut easily. We will never try to compromise that relationship.”