Witness | A Heroine is Born Amidst of Fire 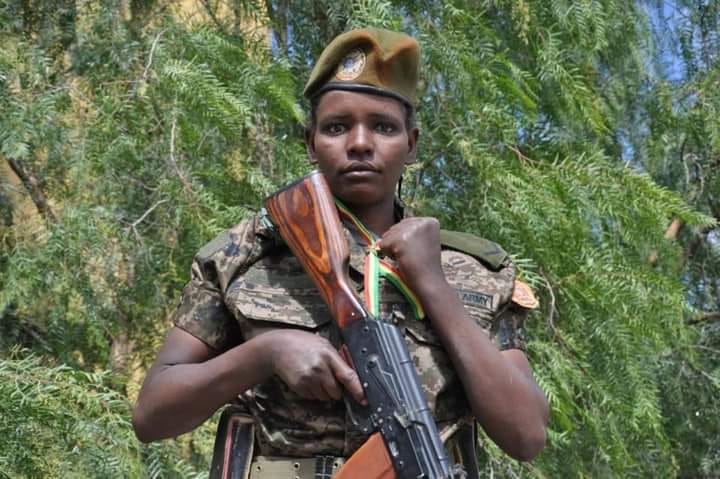 While there was a controversial and undesired law enforcing operation in the Northern part of Ethiopia, a strong, committed and brave Ethiopian woman fighter came out as a heroine during the operation.

Lance Corporal Gebeyanesh Debalke has been serving in a regiment under the 20th Division of the Northern Command with the Ethiopian National Defense Force, and was mainly serving as security guard for the Division’s Commander, Colonel Solomon G/Yohannes who was secretly serving the Tigray People’s Liberation Front /TPLF/.

In last November when the TPLF attacked the Northern Command in midnight Gebeyanesh didn’t know that he was working in favor of the group. Recalling that bloody night, this Ethiopian heroine said, “We all were made to leave our arms in a store and only the Tigray-born soldiers took security posts.”

But as soon as she realized that the Colonel hid himself in a toilet while the traitors were firing at members of the regiment who were so tired and fell asleep, she came closer to the toilet, and said “I would rather die by myself than being shot dead by these treacherous soldiers.”

Everybody was running here and there to survive. The gun shots was growing. She had to do something now. She ordered him to get out of the toilet and do what she would tell him to do or she would kill him. Extremely fearful and nervous, the commander came out of his place.

“Drop your pistol, take off your shoes and insignia!” the furious Alganesh ordered him.

The traitor colonel did everything she ordered him to do.

Now Alganesh aiming her gun at his head, the colonel moving barefoot ahead of her. Alganesh along with other soldiers she met on the way that night, kept retreating to Eritrean border.

She eventually handed over the traitor to real and loyal Ethiopian commanders, according to ENDF.

Witness are stories told by our readers with personal accounts or events of interest.

If you have one please email us at editor@horndaily.com