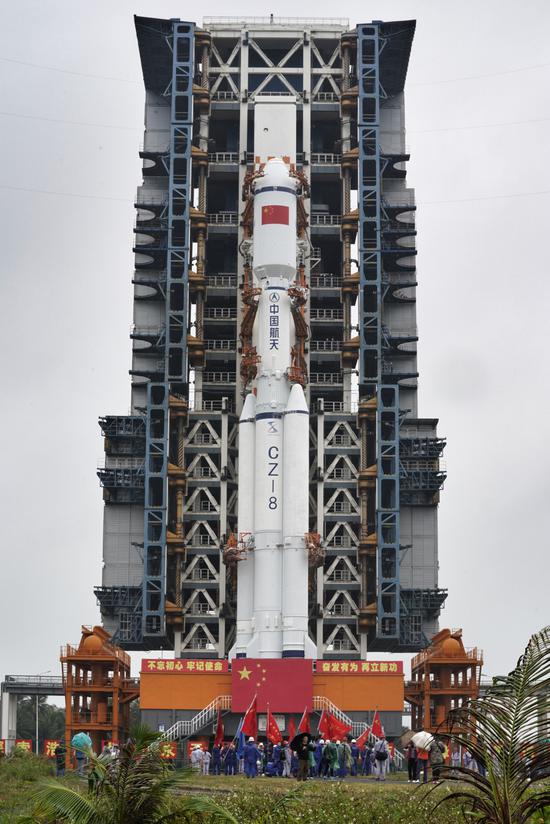 A few hours ago, the maiden flight of the Long March 8 was launched from the Wenchang Spacecraft Launch Site. One of the payloads on the rocket is Ethiopia’s second satellite, ET-SMART-RSS. Other payloads include Apocalypse constellation and Zhixing-1A.

ET-SMART-RSS, initially scheduled for October 2020 was postponed to 20 December. Due to unfavorable weather condition, the satellite was launched today. Built and launched with the help of China, the satellite is a 6U Earth observation nanosatellite with high resolution. The primary mission of the satellite program is to expose Ethiopian engineers and scientists to hands-on experience and demonstrate the Institute’s capability in integrating nanosatellite subsystems locally.

The Long March 8 carrier rocket adopts a core-stage bundled configuration with 2 boosters, with a total length of about 50.3 meters, a take-off mass of about 356 tons, a take-off thrust of about 480 tons, and a 700-kilometre sun-synchronous orbit with a carrying capacity of no less than 4.5 tons. The core structure of the rocket has a primary diameter of 3.35 meters, a secondary core diameter of 3 meters, a booster diameter of 2.25 meters, and a fairing diameter of 4.2 meters. The core level of the power system is equipped with two 120-ton YF-100 liquid oxygen kerosene engines, the second level of the core is equipped with two 8-ton YF-75 hydrogen-oxygen engines, and the booster is equipped with one 120-ton YF-100 liquid oxygen kerosene. engine. In December 2019, Ethiopia launched its first satellite named ETRSS-1, a 70kg multi-spectral remote sensing satellite from China onboard a Chinese Long March 4B rocket. The China Academy of Space Technology (CAST) developed the satellite in collaboration with 21 Ethiopian technicians, trained on the project as part of the technology-transfer agreement between Beijing and Addis Ababa. The Chinese government provided 75% of the total cost of the ETRSS-1 satellite, worth about USD 6 million, and helped to launch the satellite.

ET-SMART-RSS marks another worthwhile achievement in Ethiopia’s space ambitions as the East African nation conceives a longterm plan of having indigenous capabilities in the development and operation of satellite systems. The construction of satellite manufacturing, assembly, integration and testing (MAIT) facilities in Addis Ababa is the works following the agreement signed by the Ethiopian government and French space company ArianeGroup with funding from the European Investment Bank.

Ethiopia also plans to launch a third satellite following a contract the government signed with China for the construction of a communication satellite for commercial telecommunications and broadcasting services. The details of the contract and the satellite development timeline have not been disclosed.

This is the first time an African country will launch a satellite in 2020 and brings the total number of satellites launched by African countries to 42.