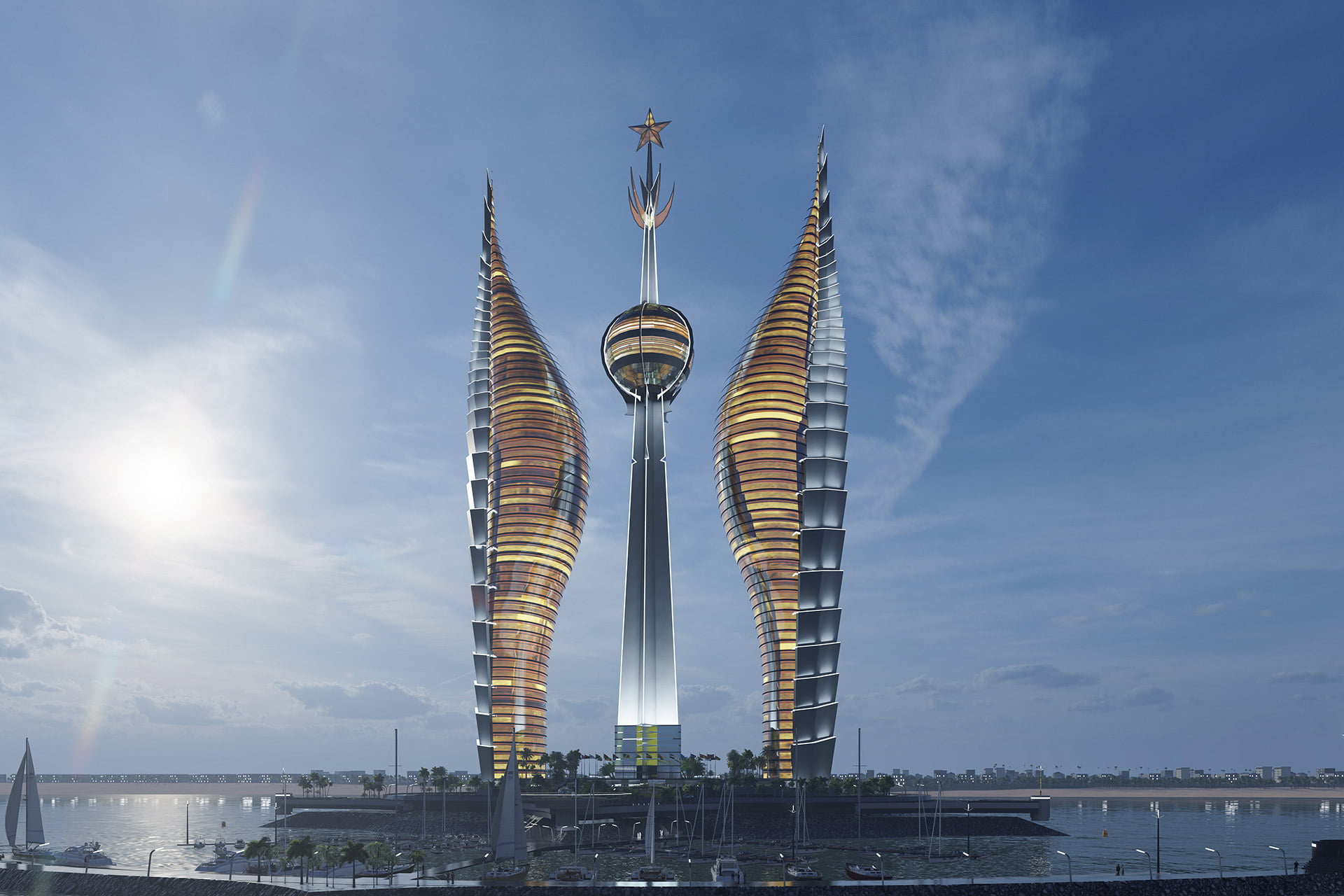 Russian architect Alex Wizhevsky has designed an incredible high-rise cultural and business center in the form of the national emblem with the working title “DJIBOUTI TOWERS”.

This is the first complex of skyscrapers in the world, embodying the national symbols of the country – Republic of Djibouti. Due to its uniqueness, it will become a symbol of the gateway to East Africa.

The project is an incredible composition of three towers. The central tower represents a spear and a shield and the star at its top symbolizes the unity of the nation. There are two symmetrical towers on both sides of the spear. They are designed in the form of two traditional Djibouti daggers, decorated with elements symbolizing a Laurel wreath. The Laurel wreath represents the peace granted to the people of Djibouti after independence on June 27, 1977.

“DJIBOUTI TOWERS” will be the tallest complex of skyscrapers in Africa, the height of which will be 243 meters.

It is expected that representatives of large international business, financial sector and retail will be located on the territory of two towers, each of them will be 43 floors high.

The project has already been approved by the President and the Government of the Republic of Djibouti. Moreover, the construction was provided with the piece of land, which is allocated in the city of Djibouti, which is the capital.

What the complex will include:

Four-level basement floor; Trade & Entertainment Centre with boutiques, restaurants, cinemas and Concert and Exhibition hall; Business center with representative offices of large companies; Private residence; Luxury hotel; Panoramic restaurants and observation decks; The heart of the complex is a rotating ball, symbolizing the union of all peoples, races and cultures of Africa; Conference halls for receiving high-ranking delegations, as well as observation decks and panoramic restaurants.

There is no doubt that the construction of the towers will transform the region into a business district with a developed infrastructure, business environment and eco-friendly green spaces. Djibouti new architecture will attract a large flow of tourists and investment to East Africa, which means great importance for the development of the region.

As the chief architect of the project, Lex Wizhevsky, says: “We hope that the business and cultural development center “Djibouti Towers” will become a symbol of peace and national unity of the Horn of Africa states.”