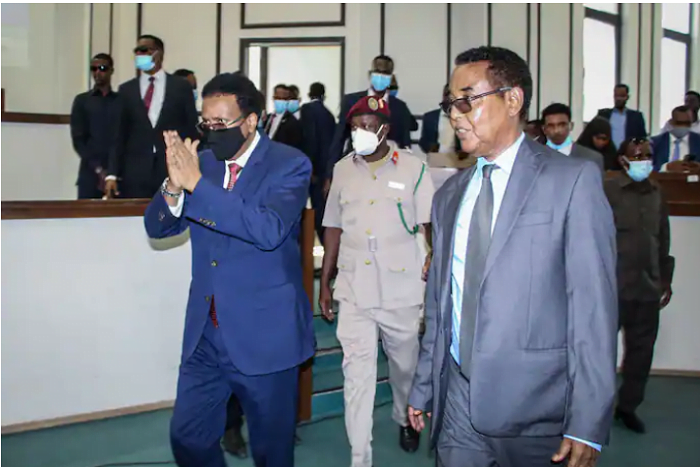 President Mohamed Abdullahi Mohamed, left, attends a special assembly about his presidential term in Mogadishu on May 1. (AFP/Getty Images)

Somalia’s federal government and leaders of most of its regional entities announced an agreement Thursday on long-delayed national elections, heading off a crisis that had threatened to return the country to widespread political violence.The agreement laid out a path to parliamentary elections to begin within 60 days, with the selection of the president to follow. The presidential selection was planned initially for early February, but disagreements about particulars first delayed the process and then led President Mohamed Abdullahi Mohamed, widely known by his nickname Farmajo, to postpone them for two years, allowing him to stay in office during the interim.

Facing a potential uprising led by his political opponents and withering pressure from the United States and other Western backers, Farmajo reversed that decision earlier this month and returned to talks that yielded Thursday’s announcement.

“This is a historic agreement. In the past, these negotiations took place in other capitals, brokered by foreigners, but this time we insisted it would be a Somali-owned, Somali-led process,” said Mohamed Abdirizak, Somalia’s foreign minister. “Sure, it brought us to the brink of collapse, conflict was about to break out, the road was full of holes, but today is a celebration of having not let that happen.”

Elections in Somalia are considered key to cementing the stability of a government in Mogadishu that has only recently taken root after more than three decades of civil warfare waged by Islamists and rival clans. The current election system, upheld in Thursday’s agreement, is an indirect one in which clan elders select members of parliament, but Farmajo has said that he would continue working toward “one person, one vote” should he be reelected.

“We support the outcome,” said Abdirahman Abdishakur, an opposition candidate who has been highly critical of Farmajo. “This will provide a better chance of a fairer election.”

The agreement was brokered by Farmajo’s deputy, Prime Minister Mohamed Hussein Roble, but much of the pressure on Farmajo was external. U.S. Secretary of State Antony Blinken had publicly threatened to sanction Farmajo and other federal officials if election negotiations failed.

Somalia’s recent political instability has revived fears that its weak army, little-improved by years of foreign training, is ripe for exploitation by competing political interests. In late April, when an election agreement seemed out of reach, and Farmajo’s opponents viewed him as trying to stay in power indefinitely, units of the national army appeared to divide along clan and political lines, even firing upon each other.

Although the agreement lessened the chance of outright political violence, analysts said it changed few of the underlying factors of the recent instability.

“When we say a crisis has been averted, we’re just saying it could have been worse. But it should never have gotten to where we are now,” said Mohamed Mubarak, a political analyst and director of the anticorruption organization Marqaati. “The divisions in the security forces are irreparably damaged. We now know they are more loyal to their leaders than to the country. We will see if Roble can juggle this madness until we hold elections.”

Those worries were deepened by the withdrawal of almost all of the United States’ military advisers earlier this year. Although most were relocated to neighboring Kenya and Djibouti and continue to advise an elite unit of Somalia’s special forces known as Danab, their physical presence in Somalia was viewed by many analysts as a bulwark against politicization of the armed forces.

Farmajo, a former U.S. citizen and civil servant in the Buffalo suburbs, was elected in 2017 and for a short period was viewed as an outsider who might break the chains of corruption, dysfunction and clannism that have stunted Somali politics for decades. Lackluster progress on anti-corruption measures as well as what critics perceived as a power grab around election planning dimmed many of those hopes.

His participation in the election negotiations was controversial enough that opposition leaders rejected it, and he ultimately conceded, handing over the government’s role in the talks to Roble.

“Through these specific talks, Farmajo really didn’t play much of a role, but that doesn’t mean that he permanently is sitting out the campaign period,” said Omar Mahmood, a senior Somalia analyst at the International Crisis Group. “There are still some questions as to the president’s role in the process as there aren’t great checks built into the process.”

Outside of Somalia’s political machinations — although certainly not unrelated to them — much of the country remains in a dire humanitarian crisis aggravated by a locust infestation, flooding and the continued dominance of al-Qaeda-affiliated al-Shabab across important agricultural areas in the rural south. About a third of the country’s people rely on humanitarian aid, 3 million of whom might not have any food without it, according to recent reports by U.N. agencies.

Ironing out an election would only be a waypoint in the more difficult process of undergirding Somalia’s democracy so that political powers might better tackle al-Shabab and other challenges rather than focusing their rivalries on each other.

“Even with an agreement, it will depend on how our leaders conduct themselves,” said Abdirizak, the foreign minister. “If they violate this agreement, or try to unfairly change some of the details, then the election process will not be credible. That will not produce a government that can govern. Governance is not just a piece of paper with a signature.”