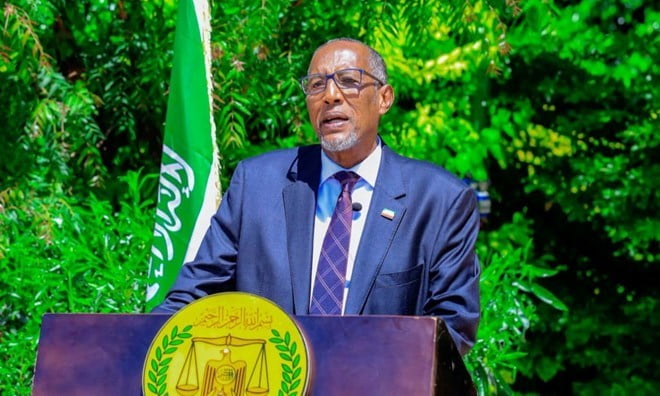 HARGEISA (HOL) – Somaliland president Muse Bihi has urged his people to turn out and vote tomorrow noting the parliamentary and local government elections would boost unity in the break-away region.

Ahead of the poll on Monday, Bihi who was re-elected in 2017 said the vote tomorrow will bring forth a united front.

“The House of Representatives will bring together people selected by all regions, and local governments will bring together people selected by districts and villages in the district capital,” he said.
“We will get a united front, and when the union unites we will unite our forces and we will have something in common. There will be no conflict and suspicion.”

Just over one million people registered to vote in the parliamentary and local government elections. The voters will be casting their vote in 2,709 polling centres within the territory of Somaliland.

According to the electoral commission, SLNEC, 246 candidates are vying for a seat in the 82 member House of Representatives while 552 candidates will be contesting in the local government elections spread in 23 districts.

The election tomorrow will be a first for many Somalilanders. Children who were born when the last parliament was elected in 2005 will be casting their vote tomorrow for their second member of parliament.

Meanwhile, observers from the region and beyond have trooped to the break-away region. Notable figures include former Sierra Leone president Ernest Koroma and former Ugandan opposition chief Kizza Besigye.

Foreign missions with their presence in Somalia are also sending representatives.