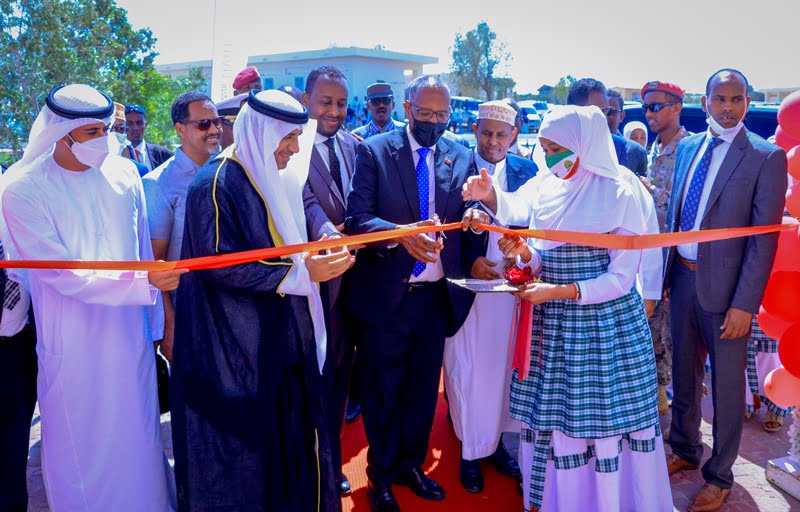 Berbera International Airport is now operational and ready for the biggest of flights sojourn.

In a well-represented function held at the airport, the newly restored, renovated, and modernized complex with state-of-the-art facilities was officially opened by the Head of State, who profoundly thanked the government of the Kingdom of the U.A.E. for funding the institution, thus, in essence, by standing by the nation and people of Somaliland at a dire time.

He said that the people of the Republic of Somaliland were indebted to the good gesture shown by the U.A.E. who aided the aviation industry at a hard time.

He expressed hope that the newly renovated airport, which will operate to international standards, will attract more transit planes from all over the globe, thus becoming a new window for investment owing to global integration.

He hailed the Berbera residents (and Sahilians as a whole) for helping usher in the development being made in the region.

The airport immediately became operational soon after the inauguration and the first flight to lift off the airport was of Ethiopian airlines which had amongst its passengers, the entourage of the president and his delegation to the port city, plus several other dignitaries.

With him to grace the ceremony were several cabinet ministers, UAE kingdom officials, numerous members of the diplomatic corps, the deputy speaker, and MPs, senior government officials, Ethiopian Airways senior officials, and some eminent personalities.

The minister whose portfolio carries the transportation docket, Hon. Mohamed Ibrahim Ataash pointed out that the airport would definitely open new avenues for investment in the country, hence propping up development.

The airport has now been constructed with modernized terminals.

The runaway, which is over 4 KM, is in a holding area of 30 KM2 with well-fenced perimeters.

Amb. Abdullah Al Naqbi led the senior UAE officials at the function while the Rep of Somaliland Aviation Authority head Mr. Omer Seyid conducted the president in the tour at the airport.

Nov 30, 2022 Senior News Editor
Ethiopia The Rest of the World