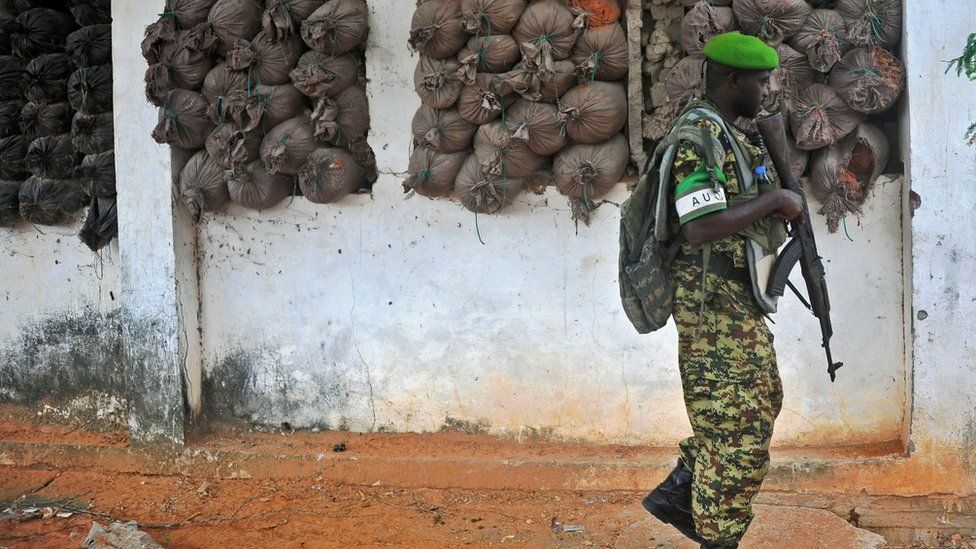 The Islamist militant group al-Shabab says it has carried out what may prove to be one of its most deadly attacks on the African Union Mission in Somalia. However, the two sides provide very different death tolls.

The al-Qaeda affiliate says it killed 170 AU soldiers, mostly from Burundi, and captured an unknown number of soldiers as prisoners of war. However, Burundi’s army says that it has lost 10 soldiers, with another five missing.

It has not been possible to independently verify these claims.

What happened in the attack?

The assault in the country’s Middle Shabelle region saw heavily armed fighters storm the al-Baraf base about 160km (100 miles) north-east of the capital, Mogadishu, where Burundian forces, serving under the AU mission, were stationed.

Local people reported hearing a loud bang followed by gunshots on the morning of the assault.

“The attack happened early Tuesday morning,” a member of the AU mission, who asked to remain anonymous, told the BBC. “Two vehicles filled with explosives entered the compound and a gunfight ensued. I don’t know the exact number of people killed but there were many casualties.”

What has the AU said?

The African Union has condemned what it calls a “terrorist” attack.

AU Commission chairperson Moussa Faki Mahamat paid his respects to the Burundian soldiers killed in the deadly attack, saying “those lost will never be forgotten”.

In a statement, the AU said the attack would not lessen the work of the African Union Transition Mission In Somalia (Atmis). It added that it would continue to support the Somali government in its aim of achieving sustainable peace and security.

Mr. Faki said he’d spoken to Burundi’s President Évariste Ndayishimiye to express his condolences. Mr. Ndayishimiye said there were no words strong enough to condemn the attack on Burundian soldiers.

The Burundi army said 10 of its peacekeepers in Somalia were killed in the attack and another five were missing. However, a high-ranking officer in the Burundian army told the AFP news agency that 30 of their soldiers had been killed and dozens more were unaccounted for.

Atmis force spokesperson Lt Col Daniel Mugoro Muiruri told the BBC that most of the details about the attack were still being verified.

The AU does not normally release the death toll from al-Shabab attacks.

The Somali government has also condemned the attack.

It commended the work of Atmis and the Somali army for defending themselves against the militants.

“We extend our deepest condolences to the victims of this terrorist attack, to their families, to the African Union, and to the friendly government and people of Burundi,” it said in a statement.

It has also appealed to the international community to provide better support to combat terrorism in the country.

Is this one of the worst attacks the AU has suffered?

It is certainly the biggest attack in recent years, it is also the first attack on Atmis since it replaced the former force, known as Amisom.

The force is basically the same just with a new name but under a UN resolution, Atmis plans to gradually reduce levels of staffing from 20,000 to zero by 2024.

In 2015, an early-morning raid by al-Shabab militants on another Burundian base killed at least 70 soldiers. The assault took place in the Lego district of Somalia, and some victims were decapitated.

The following year, it attacked the el-Ade base in southern Somalia. The Somali government said that 180 Kenyan troops had been killed, although this has never been confirmed by Kenya.

How much of Somalia does al-Shabab control?

Al-Shabab controlled Somalia’s capital Mogadishu until it was pushed out by AU forces in 2011.

However, the militant group still controls many villages and territories in the country, including some areas neighboring the capital. It also controls major routes which lead to the main city.

The group, which seeks to impose a strict version of Sharia, or Islamic law, regularly attacks military, civilians, and government officials in the capital and around the country.

The latest assault comes less than a week after the Somali parliament elected speakers for both the lower and upper house – a move which brings the country one step closer to finalizing what has been a lengthy process to choose a new legislature, which in turn will elect the country’s next president.

The process has been bogged down in rivalry between the country’s president and prime minister, which the militants have capitalized on.