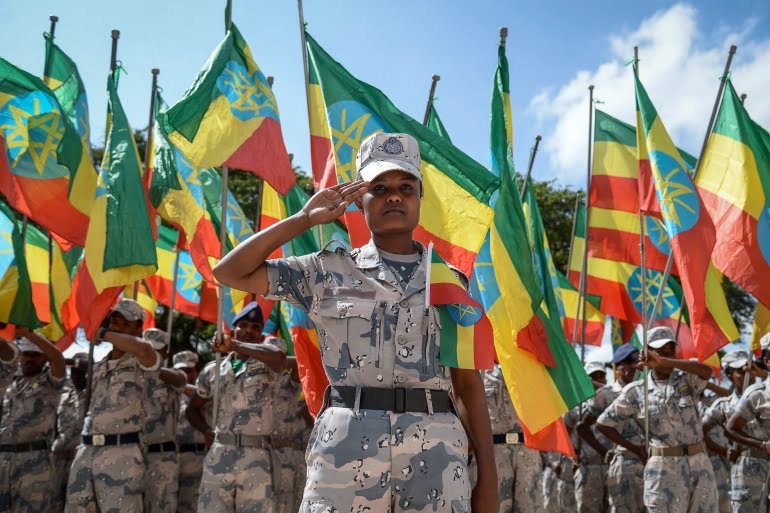 On Tuesday, the Ethiopian government and the Tigray People’s Liberation Front (TPLF) agreed to a “permanent cessation of hostilities”, effectively ending ten days of negotiations – led by the African Union in South Africa – and a civil war that began in November 2020.

Both parties in the conflict which has left thousands dead and displaced millions in the northern region of Tigray agreed to “orderly, smooth and coordinated disarmament” and “restoration of law and order”, according to former Nigerian President Olusegun Obasanjo, the lead mediator in the talks.

“Our commitment to collaborating for the implementation of the agreement is equally strong,” he added.

The landmark deal brings an end to the conflict in which “war crimes and crimes against humanity” were committed by both sides, according to a United Nations commission of human rights experts.

Here are five key takeaways from the agreement which stipulated that both sides reject “violence as a method of resolving political differences” in the future.

‘Ethiopia has only one defense force’

War broke out in November 2020 when Ethiopia’s federal government sent troops into the region after TPLF accused Prime Minister Abiy Ahmed of centralizing power at the expense of the regions. It pitted the regional force from Tigray against Ethiopia’s federal army and its allies from other regions and neighboring Eritrea.

In Tuesday’s agreement, both sides “agree and recognize” that the Federal Democratic Republic of Ethiopia has “only one defense force”. Consequently, there will be a disarmament, demobilization, and reintegration (DDR) program for TPLF fighters.

Both sides have 30 days after the agreement is signed to agree upon the schedule of overall disarmament of TPLF including light and heavy armaments.

Representation and inclusion for Tigrayans

Based on the agreement, both sides agreed on the restoration of Ethiopia’s federal government in Tigray.

TPLF committed to respecting the constitutional authority of the federal government and to “cease all attempts of bringing about an unconstitutional change of government”.

In return, the Ethiopian government committed to stopping military operations targeting TPLF, restoring essential services in the region, and lifting the “terrorist” designation on the TPLF fighters.

The federal government also agreed to ensure and improve the representation of the Tigray region in national institutions, including the parliament, which could prove crucial as the region has complained for years of marginalization by the federal government in Addis Ababa.

Since June 2021 when Tigrayan rebels recaptured the region from federal forces, Ethiopia’s government has cut off essential services there, leaving people to struggle with food shortages and no access to basic utilities.

Due to that and continuing violence, trucks carrying humanitarian aid have not been able to deliver food in the area.

In September, a truck belonging to the World Food Programme was hit by debris from a drone attack and injured the truck’s driver. Hospital officials have also previously raised the alarm about food and medical supplies being exhausted in some facilities in the region.

According to the UN, more than 13 million people need food assistance across northern Ethiopia.

Now, the federal government has committed to allowing unhindered access to aid, with the help of humanitarian agencies, to address these needs – especially for women, children, and the elderly. The government also agreed to facilitate the return of those displaced outside the region in due time.

Ethiopia and Tigray leaders are to ensure that the aid is used only for humanitarian purposes.

‘Immediate and permanent cessation of hostilities

The federal government and TPLF both agreed to “the cessation of overt and covert acts of violence” and to also end “hostile propaganda, rhetoric and hate speech” towards both sides.

Both sides agree to not only respect the FDRE constitution but also respect fundamental human rights to protect civilians and ensure accountability in accordance with the constitution and the AU’s Transnational Justice Policy Framework.

The agreement also covered the protection of civilians, especially millions of people who have been displaced due to violence in Tigray.

The deal also stipulated an end to sexual and gender-based violence and violence against children, women, and the elderly, as well as the recruitment of child soldiers. There have been numerous reports suggesting that TPLF had recruited child soldiers and that federal and allied forces have been using rape as a weapon.

In April 2021, the United Nations Security Council issued its first joint statement on the continuing crisis, expressing “deep concern” about allegations of human rights violations, including reports of sexual violence against women and girls.

Nov 30, 2022 Senior News Editor
Ethiopia The Rest of the World