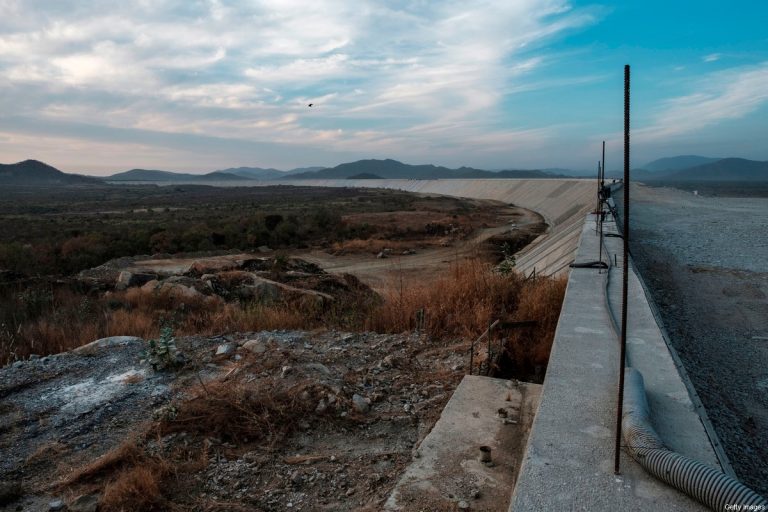 A general view of the Saddle Dam, part of the Grand Ethiopian Renaissance Dam (GERD) in Ethiopia on 26 December 2019 [EDUARDO SOTERAS/AFP/Getty Images]

(middleeastmonitor)–The Fatwa Committee of the Al-Azhar Islamic Research Centre in Egypt yesterday said that countries whose share of Nile waters will be negatively affected by the Grand Ethiopia Renaissance Dam can do whatever it takes to preserve their rights “as long as they deem these actions appropriate”.

“Water is a public utility and no country should be deprived from benefiting from it,” the committee said in its legal ruling, adding that the Nile Basin countries should avoid causing harm to countries downstream.

“If the Nile Basin countries do not avoid harming the river’s downstream countries, then the affected countries have the right to take every action to remove this harm,” the committee said in its fatwa.

Ethiopia started building the Grand Ethiopian Renaissance Dam (GERD) in 2011 on the Blue Nile, a tributary of the Nile River, near the border with Sudan.

With a reservoir capacity of 74 billion cubic metres, the hydroelectric dam will produce 6,475 megawatts for Ethiopia’s domestic and industrial use, as well as export to neighbouring countries.

Egypt fears its share of Nile waters will be negatively affected by the filling of the dam’s reservoir.