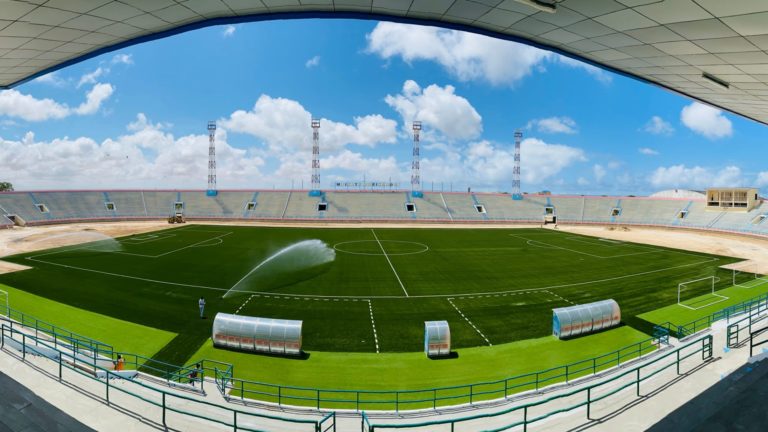 It has been a long wait, but the refurbished Stadium Mogadishu finally saw some sporting action take place at the start of July. The nation’s premier football venue is now ready to host the Somali national team, among other events.

Stadium Mogadishu was built in 1977 and quickly became a hugely popular venue for a variety of sporting action, as well as political rallies and other major events. The 1990s saw it fall into disrepair, as it came under military control and football matches here became less frequent.

Thankfully, the stadium’s decline was halted this year, as the infrastructure was completely rebuilt. A new artificial turf surface was also laid, in March 2020. While there had been several re-constructions attempts in the past, this time the stadium is looking great and is ready to use.

The work was carried out following an agreement that was reached between the Somali government and the authorities in China, as part of an overall plan to improve the country’s infrastructure and speed up its recovery.  It now has a 60,000 capacity.

What Events Will be Held Here?

The honour of playing the first game in this impressive new stadium was given to Mogadishu City Club and Horseed Sports Club, from the Somali Premier League. This was the first football game in Somalia in three months, following the Covid-19 outbreak and subsequent closure of sporting activities, and Horseed won it by 2 goals to 1.

President Mohamed Abdullahi Mohamed kicked the first ball, to symbolically declare the national stadium open once again. The final cost of the redevelopment work hasn’t been revealed yet, but it was clearly a major project.

The Somali national team will also play their home games here from now on, after a 16-year wait. Recent years have seen the Ocean Stars having to give up their crucial home advantage by playing these games in other countries. The opening game in the CAF FIFA World Cup Qualifiers for Qatar 2022 had to be played in Djibouti, where Zimbabwe achieved a 3-2 overall victory against Somalia.

Abdiqani Said Arab is the Somali Football Federation president. He pointed out that getting the stadium open for business again was the country’s biggest development in the sport this year. He also confirmed that FIFA is providing financial help for them to build the federation’s new headquarters next to the stadium.

Officials hope that tens of thousands of spectators will fill the ground, to generate an exciting atmosphere for the upcoming national team games. Apart from football, the likes of tennis and volleyball can be played here. Somali sports fans who are fans of basketball and enjoy betting on the NBA odds, can also look forward to see some hoops and dunks there.

It is expected that being able to finally play international matches in Somalia will also help the authorities to save money. For the last 16 years, they have been forced to spend to send their players on a return trip to Djibouti for every home game.

It is also worth mentioning the work going on at Waamo Football Stadium, in Kismayo. This port city is 500 kilometres away from the capital and a stadium is being constructed there as part of the FIFA Forward Project.

Football officials recently visited the site and confirmed that work is advancing well. It is now expected that this stadium will be ready for use by the end of 2020.

It is still thought that the country lacks the variety of professional sporting facilities that it needs to progress in sports like football. However, these works are a step in the right direction.