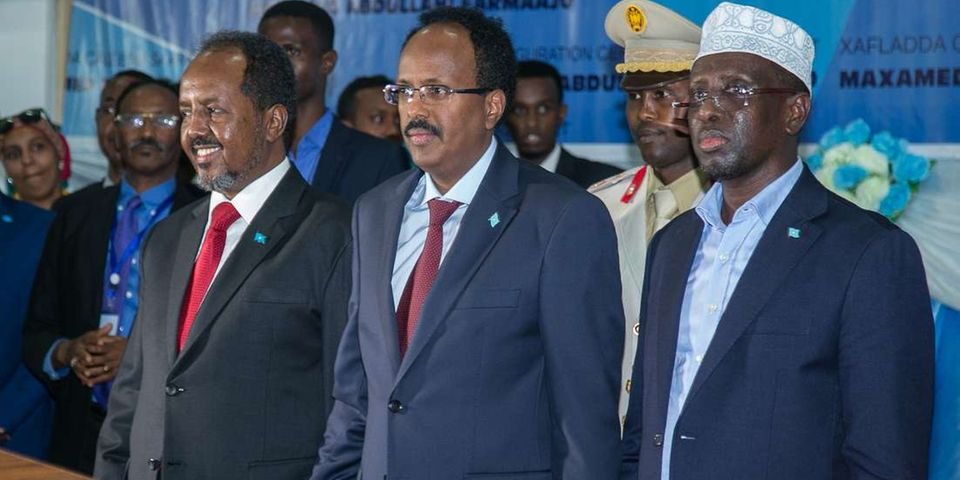 In Somalia’s political scene, the revolving door is brutal and not even presidents can be safe.

Every sort of election held in and out of Somalia since the fall of Siad Barre has often produced a new leader, their legitimacy notwithstanding.

In modern times, when Somalia started settling down in 2009, all the three elections held since have returned a new president, becoming the only country in the Horn of Africa not to re-elect a sitting head in the new millennia.

Yet analysts told the Nation that the country’s problems a decade ago are still the same, three presidents later. These include insecurity, lack of a permanent constitution, a broken justice system, poverty and generally weak institutions.

President Mohamed Farmaajo, the incumbent, has been faced with criticism for failing to address these issues. Now he is facing people he defeated years ago. The opponents, it appears, are riding on a new wave of fear among the Somali public of just how bad or good it could turn if they vote in a new face. They have also united in a common alliance known as the Forum for National Parties, led by former president Sheikh Sharif Ahmed.

One-term presidents
“In the recent political history of Somalia, there have been one-term presidents. It would be beneficial to see a president re-elected,” Mohamed Abdirizak, a senior director at consulting firm FDG-Synergy in Nairobi and who was once an advisor to President Farmaajo, told the Nation.

Somalia as a country that is emerging from civil conflict, he argued, needs to integrate, grow its economy and address security.

“Somalia needs a President who can nurture the socio-economic and political healing process of the society, a president who can deal with the difficult political settlement issues, a president who will make security a priority. Somalis have a good sense of who they want to lead their country, but they have to be given a chance to elect their leaders,” he said in an interview on Friday.

Somalia could be unique though.

It means former president Sheikh Sharif Ahmed as well as the sitting president are competing for one trophy: re-election.

Since 2009, Somalia have been under Ahmed, Hassan Sheikh Mohamud and Farmaajo. The first two are allies. But who fairs better between the two sides?

“I think Hassan Sheikh Mohamud has addressed some of the key issues during his tenure quite better, with some limitations, through broad based consultations with the stakeholders,” Abdimalik Abdullahi, a researcher on the Horn of Africa said.

“Of course all the three presidents had operated in different contexts but with more or less similar issues to tackle ranging from security to domestic politics,” he told the Nation.

Hussein Erab Isse, former defence minister and now a representative of Somaliland in the Somalia Parliament, said Farmaajo’s administration failed to pick up early successes of his predecessors.

“This current administration failed miserably in completing all the tasks that were given to them in 2017. Basically, the key areas for them to address and finalise was the constitution, which is incomplete, security which has gotten worse, and the integration of the armed forces which has not happened,” he said citing continued conflict between the central government and member states.

Somalia, Isse told the Nation, has failed to hold the universal suffrage planned for this year largely because “truly, delivering this country from point A to B as far as the government is concerned has been a total failure and an utter disaster”.

Critics say Farmaajo did not continue work started by Sheikh Sharif Ahmed, who left power in 2012 to Hassan Sheikh Mohamud and hence transforming the Somali government from the transitional government to full government. In 2012, Somalia held elections on home soil for the first time in 45 years and Ahmed lost and conceded.

Al-Shabaab chased out
During his term, Al-Shabaab were chased out of Mogadishu, allowing him to reopen the airport to the outside world.

Yet the provisional constitution passed in his tenure is still in use, which critics say needs rectification to help governance.

“The constitution has remained a draft and very ambiguous. It needs to be sorted before we to look into other important issues such as electoral model, political parties and physical federalism,” Abdirashid Abdullahi Mohamed, a former governor of Bay Region in Somalia and one-time defence minister, told the Nation.

“Sheikh Sharif was the closest in addressing key problems for Somalia since he was focusing more on the security which is the most important issues as well as reconciliation of the population that had experienced a series of conflicts,” added Mohamed.

A former leader of the Islamic Courts Union, the precursor of Al-Shabaab, Ahmed transformed to mainstream politics and defeated the militants. He established the nascent Somali National Army, opened the main seaport and re-launched the central Bank. Allies say he ran affairs on an annual budget of USD900,000 compared to the current annual budget of USD460 million.

“He has been tested and what this country needs now is no more experiment with new faces and making sure that we have proven leadership and somebody that has been tested prior. I think Mr Sheikh Sharif fits that category of leadership,” Isse told the Nation.

Talks with Somaliland
“He has the capability of bringing together the heads of the member states, including Somaliland where he has had a fantastic relationship and had the trust during his negotiations in 2012.The current administration has failed to finalise talks with Somaliland.”

In fairness, Farmaajo’s administration has helped Somalia reach debt forgiveness and recently announced elimination of ghost workers in the army. Yet wrangles with federal states and the resurgence of Al-Shabaab has made him fodder for critics.

In 2019, he mobilised six political outfits to form the Forum for National Parties (FNP), becoming the first coalition in independent Somalia.

FNP includes his party Himilo Qaran, Ilays and the Union for Peace and Development led by ex-president Hassan Sheikh Mohamud.

“As someone who supported political party development in Somalia and who wants to see a competition of ideas, I unequivocally support multiparty elections,” said Abdirizak.

“Political parties will play a vital role in deepening democracy in the country.”

It will, however, depend on how Somalia decides to vote.