All hostages held by Somali pirates are now Free 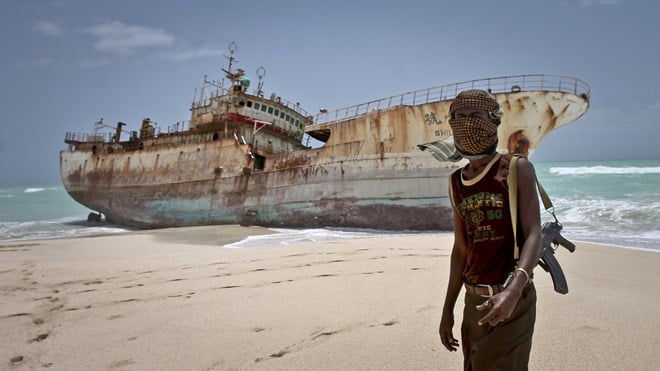 A masked Somali pirate stands near a Taiwanese fishing vessel that washed up in 2012 after the pirates were paid a ransom and released the crew. The image appears on the cover of Michael Scott Moore’s new book The Desert and the Sea. Farah Abdi Warsameh/AP

Over the past five years Somali pirates took more than 3 600 people hostage in attacks on ships varying in size from tankers through to container transporters, dhows, fishing vessels and yachts.

All those held captive by Somali pirates are now free the International Maritime Bureau (IMB) said this week when three crew members of a Iranian registered fishing vessel were released.

The three were working on FV Siraj when it was hijacked off Hobyo, Somalia in March 2015. They are now on their way home after completing COVID-19 tests and other medical checks.

In a letter dated 15 September, the Chair of the Contact Group on Piracy off the Coast of Somalia (CGPCS) expressed relief over the release made possible by the intervention of Hostage Support Partners (HSP).

“Their continuous pro-bono support and negotiations with Somali pirates and other stakeholders over the years led to the release of the remaining crew members,” CGPCS said.

HSP also facilitated the release of a fourth crew member of FV Siraj in 2019 for urgent medical care.

CGPCS commended the role of the International Seafarers’ and Assistance Network (ISWAN) which provided assistance through the CGPCS’ piracy survivors fund to support families of hostages during periods of captivity and on returning home.

IMB welcomed the release but warned ships still need to be alert and vigilant and not become complacent when transiting Somali waters as the threat of attacks still exists.

Navies need to have continued presence in the region for a stabilising effect IMB said.

Vessels are urged to continue implementing BMP5 recommended practices while transiting Horn of Africa waters.  “Somali pirates are still capable of attacks,” it said in a statement.

No attacks were reported off Somalia last year and in the first six month of 2020. In 2018 three vessels reported being fired on in the region.