WHO Chief Accused of Aiding Genocide in Ethiopia 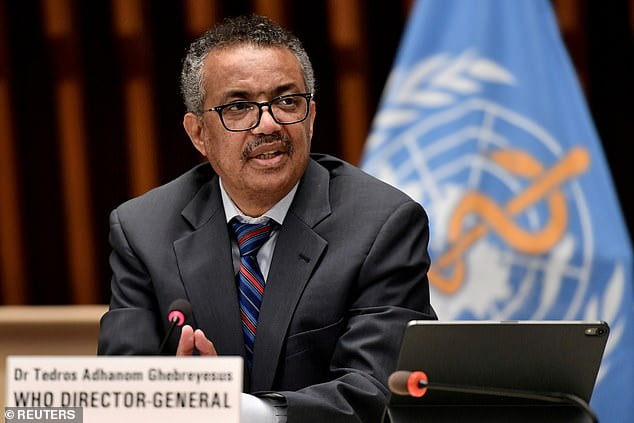 A Nobel peace prize nominee has accused the director-general of the World Health Organization of allegedly aiding genocide in Ethiopia.

American economist David Steinman accused WHO chief Tedros Adhanom Ghebreyesus, 55, of being a ‘crucial decision-maker’ who directed Ethiopia’s security forces actions from 2013 to 2015.

He accused Tedros of being one of three officials who were in charge of the security services over that period, during which the ‘killing’ and ‘torturing’ of Ethiopians took place.

Tedros was the country’s foreign minister until 2016 when his Tigray People’s Liberation Front party was in power.

Raised in Tigray, he also served as Ethiopia’s health minister from 2005 to 2012 before being elected WHO director-general in 2017, the first African to take the role.

Mr Steinman, who was nominated for the 2019 Nobel peace prize, lodged the complaint calling for Tedros to be prosecuted for genocide at the International Criminal Court in the Hague.

He claimed that Tedros ‘was a crucial decision-maker in relation to security service actions that included killing, arbitrarily detaining and torturing Ethiopians,’ according to The Times.

Mr. Steinman also alleged that the WHO chief oversaw the ‘killing, and causing serious bodily and mental harm to, members of the Amhara, Konso, Oromo, and Somali tribes with intent to destroy those tribes in whole or in part’.

He claimed that while Tedros ‘co-led’ Ethiopia’s government for four years, the regime ‘was marked by widespread or systematic crimes against humanity by subordinates’.

Mr. Steinman was a foreign adviser to Ethiopia’s democracy movement for 27 years until its 2018 victory.

Large-scale and unprecedented protests swept through Ethiopia’s largest region of Oromia beginning in November 2015, and in the Amhara region from July 2016.

Ethiopia’s security forces cracked down on these largely peaceful demonstrations, killing more than 500 people, according to Human Rights Watch.

The complaint comes after Ethiopia’s army chief Berhanu Jula claimed that Tedros was backing dissident forces in his war-torn home region of Tigray.

He accused Tedros of securing political and military support for the Tigray People’s Liberation Front (TPLF) as it fights an armed offensive by Ethiopia’s government.

‘He has worked in neighboring countries to condemn the war. He has worked for them to get weapons,’ Berhanu told a press conference, claiming that Tedros had ‘left no stone unturned’ to help the TPLF.

In the filed complaint, Mr. Steinman referenced a 2016 US government report on human rights in Ethiopia that found the ‘civilian authorities at times did not maintain control over the security forces, and local police in rural areas and local militias sometimes acted independently’.

Mr. Steinman, a former consulting expert to the US National Security Council, accused Tedros of being involved in the ‘intimidation of opposition candidates and supporters’ which included ‘arbitrary arrest… and lengthy pre-trial detention’.

The complaint can only proceed to The Hague court if it is adopted by prosecutors. It would be the first prosecution of a senior UN figure if it does proceed.

Tedros has denied the allegations and any wrongdoing.

‘There have been reports suggesting I am taking sides in this situation,” he said in a statement last month about the current situation in Tigray. ‘This is not true and I want to say that I am on only one side and that is the side of peace.’