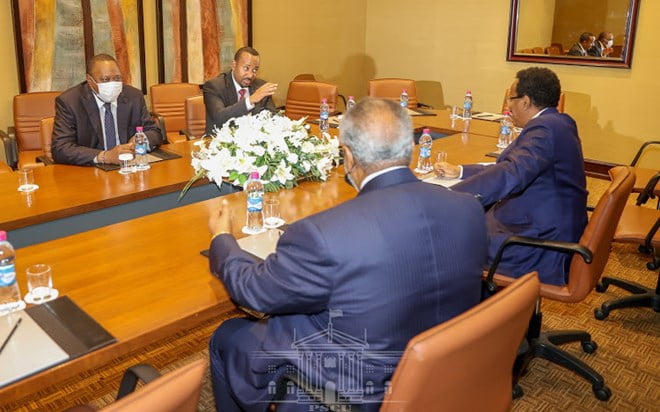 The African Union Commission now says the current diplomatic tiff between Kenya and Somalia is a major concern.

While citing Kenya’s contribution of troops to the African Union Mission in Somalia (AMISOM) and its hosting of a large population of Somali refugees as key reference points, Faki called for dialogue in de-escalating the tension saying the two countries share a long history of good neighborliness.

With regards to Ethiopia, Faki urged IGAD member states to assist the country in dealing with the humanitarian crisis arising out of the conflict in its Tigray region.

The heads of states are currently in a closed-door meeting in Djibouti.

Kenya’s escalating tiff with Somalia was taken Igad after Mogadishu wrote a protest letter against Kenya over alleged interference with its internal affairs.

The Intergovernmental Authority on Development (Igad) brings together governments from the Horn of Africa, Nile Valley and the African Great Lakes,

The regional organisation based in Djibouti supports its member states in their manifold development efforts, especially in the areas of peace processes and food security.

Mogadishu sought Igad’s intervention on frosty relations between the two nations.
The diplomatic tensions between Kenya and Somalia escalated earlier in the week when Somalia announced it had cut its diplomatic ties with Nairobi over constant violation of Somalia’s sovereignty and territorial integrity.

Somalia Minister of Information Osman Dubbe said Mogadishu would in seven days withdraw all its diplomats from Kenya.

“Somalia wants all its diplomats to go back to Mogadishu and Kenyan diplomats have seven days to leave the country,’’ Dubbe said.

He said Somalia made the decision due to Kenya’s frequent ‘interference’ with her politics.

The escalation of the diplomatic spat which has led to a ‘divorce’ came hours after Somaliland President Muse Bihi arrived in Kenya on December 13, for a three-day state visit.

Bihi was hosted for bilateral talks by President Uhuru Kenyatta. The talks are expected to conclude today before issuing a joint statement.