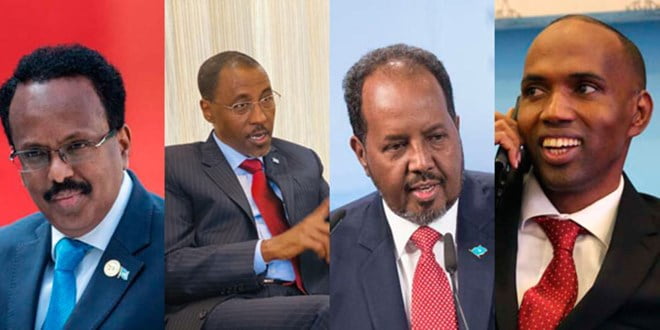 Somalia will finally elect a President on October 10, according to a definitive calendar released this week by the National Consultative Council, chaired by Prime Minister Hussein Roble.

It has opened doors for main contenders to flex their muscles, against an enduring jinx for incumbents and a grueling financial demand and other political dynamics on others.

Analysts generally say the success rate for candidates will depend on their track record, financial might, grassroots support as well as networks within and without the country.

Adam Aw Hirsi, a Somali political analyst, told the Nation that candidates will have to work harder to see as many loyal MPs as possible elected to Parliament, as the legislators vote for the President in indirect polls.

“But their final chances will depend on their communication teams, which must construct proper narratives of winnability.”

Aden Mohamed, another analyst, said the race will depend on three issues: power, money and alliances with federal State kingpins.

“The clan could galvanise support for the elites, but it is only when they feel convenient,” he said.

When elections were planned for earlier this year, more than 15 contenders expressed interest, but by this week, only eight candidates had sustained a spirited campaign for the race.
Mohamed Abdullahi Farmaajo

One of the frontrunners will be the incumbent, once an outsider but now in the seat of power, with resources and political influence that comes with it. He still enjoys massive support from his clan, even though his critics argue he has marginalised some regions.

He bears the burden of a jinxed incumbency where sitting leaders have never been reelected. He promised to end the Al-Shabaab nightmare but critics say he largely failed on improving security and mismanaged the foreign policy by fighting with neighbours and Gulf states. Some federal member states are openly against him, bearing certain unaddressed grievances.

This could open the door for a new face. Guled, with three decades in government and private sector has sufficient networks on the ground.

A former Interior minister, he was also President of Galmudug State until February 2017. He has said in the past that his experience both in and outside the government has enabled him to work up networks.

He is an alternative to the veteran contestants. He has pledged to build positive alliances both inside and outside the country.

Most of his clan elders have publicly backed him, allowing him to strengthen networks in other groups. His stint in the federal member state means he may have influence over local politics and a chance to win over new MPs.

He has a fairly clean track record in the period he served in government.

There are other contenders though such as Hassan Sheikh Mohamud, who defeated by Farmaajo after two rounds of voting last time.

At least he is not contesting as an incumbent, but still carries the burden of being the first ex-president to be re-elected. He rarely leaves the country and some see him as an elder statesman.

But his ill relations with certain federal states is still unrepaired and his continual criticism of the incumbent has earned him enough enemies.

His administration was punctuated with soldiers and police and civil servants going for months without pay and some clans raised grievances of marginalisation.

Ahmed shares a burden with Mohamud. A former school teacher, he once told the Nation he entered politics accidentally, ostensibly after militants kidnapped his student.

To date, he is credited with chasing Al-Shabaab out of Mogadishu and allowing the then transitional federal government to return to the capital, on a shoe-string budget.

But he has lost twice already to Mohamud and Farmaajo and may now struggle to build a proper alliance to help him secure victory.

The race has seen an active ex-Prime Minister front his bid too. Mr Hassan Khaire suffered the indignity of being fired in July 2020 after MPs impeached him for delaying elections.

He may have recovered to rebuild his contacts but gets the same blame for the failures of the Farmaajo.

Having been a bureaucrat most of his career, his political experience is untested, as was seen when MPs impeached him in seven minutes, a blot on his political lobbying skills.

The contest has brought pout others too.

And Gelle is influential diplomat and politician who served in previous administrations of Ahmed, Mohamud and Farmaajo.

He may have good contacts in the grassroots but has untested relationship with key political movers, however.

Could his experience help him? Having serving as Chairman of the Foreign Relations Committee in Parliament, and being MP for three terms, his contacts may be okay on the ground.

But he tried this contest twice before and fell outside of the top four. Somalia’s politics is such that unsuccessful politicians lose friends fast so this could be a risk.

A good orator who served in previous governments. He has consistently criticised Farmaajo’s failures and once said this earned him threats on his life.

But he has been in this race before and lost. His past role in previous Cabinets earned him dislike for some decisions he took.

While the eight candidate meet the criteria for sustaining the fight, the contest may yet get more entrants given the National Electoral Commission is yet to publish the official list of contenders.

The elections, analysts say, will be difficult to predict but it is likely that those with money, cleaner track records and strong alliances will perform better.