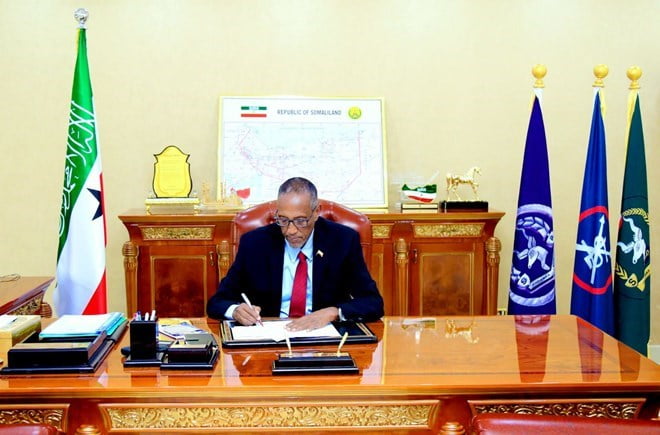 The decade-long Somaliland and Somalia talks have been ongoing since 2012 and a series of high-level talks between the two countries have been held in Ankara, London, and Djibouti with various state and international bodies as mediators and observers.

Somalia “does not recognize Somaliland’s breakaway status, and therefore maintains it is still part of Somalia’s territorial integrity, and that the Federal Government bases in Mogadishu, therefore, has authority over Somaliland as well.”

Hargeisa wants Mogadishu to accept set conditions for the resumption of talks.

The six conditions set by Somaliland for the talks include Mogadishu accepting Somaliland’s two-state process and two-state solution diplomatic engagements.

Hargeisa says this is because Somalia and Somaliland were two independent states that voluntarily united on July 1, 1960.

Additionally, Somaliland says it has for the past 31 years been an independent state enjoying peace and stability.

During that period, it says it had implemented multiple rounds of free and fair elections. There were 5 peaceful presidential transfers of power in Somaliland. Three of them through direct elections.

“All previous agreements must be respected and implemented,” said a statement from Statehouse Hargeisa.

Somaliland Ministry of Information said this is the only way to build confidence.

According to a statement sent to newsrooms, Hargeisa says “There must be an impartial and neutral International Mediation Mechanism that also guarantees the outcome of the dialogue.

Other conditions set include the incorporation of a secretariat to manage the record keeping.

The secretariat must be competent, professional, neutral, impartial, and strictly confidential.

the Dialogue will be based,” the statement further read.

In what could be a breakthrough of the stalled talks, Hargeisa also wants a Substantive Agenda addressing the core issues of the dispute between the parties.

A former British protectorate, Somaliland got its independence in 1960 but days later joined Somalia.

In 1991, it declared independence from the rest of the country following a war with the government in Mogadishu.