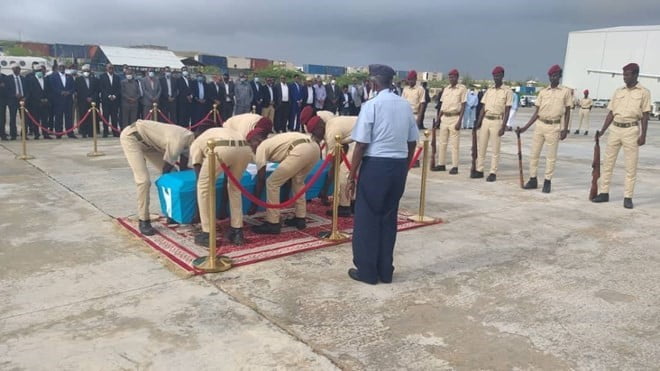 Leaders performed funeral prayers at the airport before sending the body to Garowe where Farah will be laid to rest.

A delegation led by Somali Prime Minister Hassan Ali Kheyre landed at Garowe airport on Thursday ahead a separate funeral procession for Farah, accompanied by the presidents of Southwest State and Hirshabelle.

The PM and regional leaders are expected to return to Dhusamareb after the funeral, where their talks between federal member state leaders and the federal government are expected to convene.

Farah, a towering figure in Somali politics for nearly five decades, passed away in Turkey on July 12th.
Farah served in many capacities in various levels of government, climbing up Somalia’s political ladder from the mayor of Mogadishu in 1969 to the prime minister of Somalia in 2001.

Along the way, he also served as Somalia’s ambassador to Japan and Germany, where he was stationed when Somalia’s central government collapsed in 1991.

He was instrumental in shaping Puntland as an autonomous regional state. He served as Puntland’s first interior minister under Abdullahi Yusuf. In 2008, he launched a failed bid for the Puntland presidency.

The former PM’s funerals will be attended by various dignitaries from Puntland, regional governments and the Federal Government of Somalia.