Ethiopia opens up sectors to diaspora 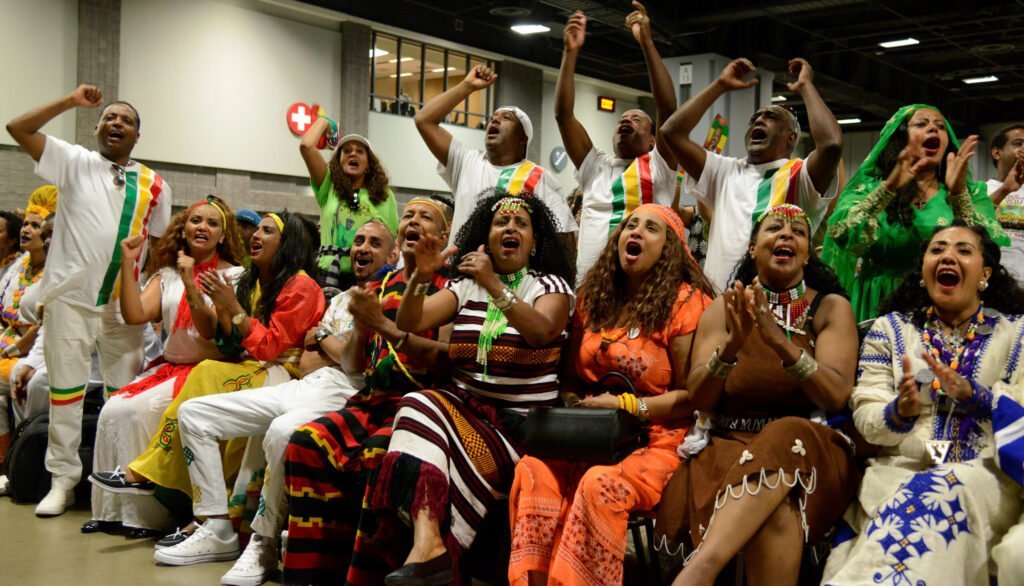 Members of the Ethiopian diaspora, the largest outside of Ethiopia, cheer as they respond to remarks by Ethiopia’s Prime Minister Abiy Ahmed, calling on them to return, invest and support their native land in Washington, U.S., July 28, 2018. REUTERS/Mike Theiler

As part of Ethiopia’s plan to liberalise its economy and boost investment, it is set to open up sectors that were once reserved for domestic investors. The new regulation is an extension of the country’s new investment proclamation, which came into effect earlier this year that gives equal playing field to Ethiopian-born foreign nationals and foreign investors.

“[There are] more opportunities for us as the economy opens up to invest our resources in our birth country, says Addis Alemayehu, an Ethiopian-born Canadian investor engaged in IT and one of the leading communications firms in the country.

While Ethiopia had encouraged the diaspora to invest in the nation, its relationship quickly soured following questions of human rights and democracy from activists based in western nations.

“We were even banned to sell our own shares in commercial banks when the government abruptly cancelled our rights to do so and we are now back to having been granted rights to own and sell and buy shares in banks” says Bethlehem Seifu, an owner of a digital company engaged in e-commerce.

In the last two years since Abiy Ahmed became Prime Minister, the contribution via the diaspora in Ethiopia’s economy has shown a significant growth. Two commercial banks with an aggregate capital of $400m are under formation by Ethiopian-born foreign nationals living abroad.

Annual remittance inflow also averaged $5.5bn over the last years; a significant growth from the $4bn average registered over five years before 2018.

“The diaspora will invest significantly in the coming years in the financial services sector since they have the legal security of ownership, unlike the past. We already see new financial services companies like mortgage banks and Fintechs under formation which now include diasporas as shareholders, says Zemedeneh Negatu, an investment advisor in Ethiopia.Daily newsletter: join our 100 000 subscribers!Each day, get the essential: 5 things you need to know Sign up Also receive offers from The Africa ReportAlso receive offers from The Africa Report’s partners

The investment regulation also listed sectors authorised for local investors (which includes Diasporas based on its new definition) and foreigners. The cement sector, for instance, is among sectors opened up to new foreign entrants.

“Dangote cement is the last company that was authorised to invest in the cement sector. Making expansions and giving licenses to new entrants was not allowed for the last five years, eventually resulting in a supply gap,” says Simegn Degu, Cement and Related Industry Research Development Technology Director at Chemical and Construction Inputs Development Institute.

Degu believes the new investment regulation will encourage new entrants to invest in the cement sector.

“This will also help the country give a long-term sustainable solution to the cement shortage it has been facing in recent years,” he adds.

The logistics sector is also partially liberalized under the new regulation. While it opened up the sector to foreign investors, they are also required to make a joint venture with local companies and are not allowed to have more than 51% stake.

Experts say this is not enough.

“Logistics is a major challenge for Ethiopia. It is a main reason for our failure to compete globally. Full liberalisation would have been even better. Foreign capital and know-how is vital to improve our capabilities there,” says Henok Assefa, an Investment Consultant with Precise Consult.

Logistic hurdles have even discouraged exporters and made Ethiopia’s export commodities just as expensive as logistics’ expenses – sometimes three times higher than the original price of the exported goods.

On 1 October, the first transport policy and logistics policy was discussed with stakeholders. Mekonnen Abera, the Director General of the Ethiopian Maritime Affairs Authority, said a regulation to further open up the multimodal sector for private actors was sent to the Council of Ministers.

Speaking to Capital, Mekonnen noted: “The [logistics] sector has received attention from the government,” adding there are about 100 intervention areas that are awaiting a response from Addis Ababa.

The regulation fully liberalised the power sector, except for exports of electricity in which foreign investors are required to partner with the state. The new regulation also allows foreign investors to engage in generation and distribution of electricity. This had been was under the monopoly of the government before the introduction of the country’s public private partnership law in 2016.

The transport sector is also liberalised under the new regulation, which allows foreigners to invest in transport services, including air, railway, ground cable car transport, cold-chain transport and marine and freight transport.

Furthermore, foreign investors can invest in sectors such as advertisement and promotion services, audiovisual services, motion picture and video recording, production and distribution and accounting and auditing services, but they cannot have more than 49% stake if they wish to invest in these areas.

Meanwhile, the financial sector remains closed to foreign investors in a bid to protect local banks, which are less capitalised compared to international companies.

Negatu suggests strengthening the local banks and preparing them for international competition before opening up the sector. He recommends consolidation (mergers) of the relatively small 16 private commercial banks into 4 or 5 very large ones. “Banking is a scale business, you need a strong balance sheet to compete,” he says.

“Ultimately, the financial services sector will open up to international banks, it’s a question of timing,” adds Negatu. “One thing to keep in mind, the international banks that will be keen to invest in the Ethiopian banking sectors are primarily from Africa including Kenya, South Africa and Nigeria.”

Western banks from the US and Europe are not in the expansion mode in Africa and in fact in many countries they have curtailed their retail banking business and focus mostly on corporate banking or in some cases, like Barclays, pulled out of Africa completely.