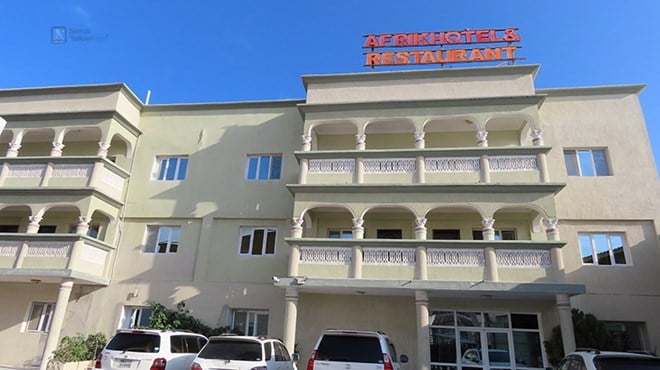 There have been loud explosions and gunfire in Somalia’s capital Mogadishu.

Witnesses say a speeding car blew up outside a hotel near Somalia’s main international airport. There are unconfirmed reports that militants entered the hotel building.

Police said there had been casualties but numbers were unclear.

The city is targeted frequently by the militant Islamist group al-Shabab.

There are fears the recent withdrawal of hundreds of American troops could lead to further instability in Somalia which is due to hold elections next month.

A private radio station in Somalia has tweeted a video about the latest explosions:

A retired army general and former minister of state are among those who have been rescued in the ongoing siege at Hotel Afrik in Mogadishu amid fears of rising casualties as security forces engage the militants holed up in the hotel.

Yusuf Mohamed Indha-ade a former minister of state, ex-SNA commander General Mohamed Nur Galal and the owner of the hotel Hussein Goley are among those who have been rescued.

Security guards manning the hotel and auto rickshaw drivers who operate around the hotel are thought to have been the first casualties.
A vehicle loaded with explosives ripped through the entrance of the hotel located along the airport road at about 5pm local time paving way for the militants who stormed the hotel.

They are suspected to have made way into the rooms of the three storey hotel.

Gunfire can still be heard from the scene as initial reports indicate security forces are yet to enter the hotel.

There is no official comment yet from Somali authorities on the terrorist attack.