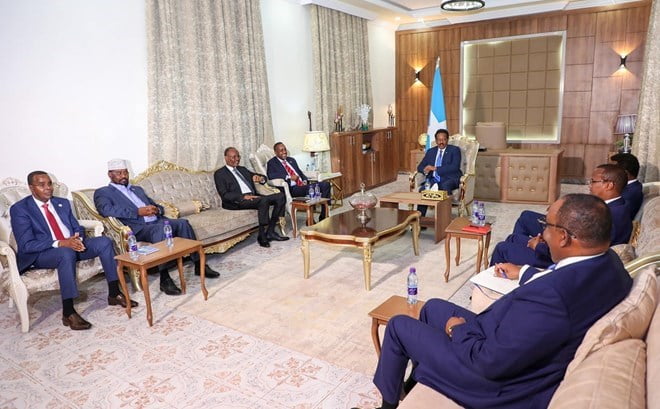 DHUSAMAREB (HOL) – President Mohamed Farmaajo has bowed to pressure to disband the federal elections team and withdraw from the appointment of elections team for Somaliland in a major move that could unlock the ongoing political gridlock.

Sources present at the ongoing talks in Dhusamareb have told HOL Farmaajo has accepted to reconstitute the Federal Indirect Elections Team (FIET) and in particular leave out names of senior civil servants and security officials who had been picked for the job.

Opposition groups including the Council of Presidential Candidates (CPC) have variously demanded the president names a new team on grounds that individuals in the committee were purposely appointed to advance the president’s re-election bid.

The President, who has been the punching bag of the opposition and both Jubbaland and Puntland over these issues has also accepted to pull out from appointing the Somaliland Indirect Elections Team.

The matter will now be left to Upper House speaker Abdi Hashi and Deputy Prime Minister Mahdi Guled both of whom are the senior most government officials hailing from Somaliland.

The two issues have been the most contentious putting the president and CPC at loggerheads. Jubbaland and Puntland on the other hand have separately been pushing for the withdrawal of federal troops from Gedo region.

It was not immediately clear if the matter had been conclusively dealt with.

Other pending issues includes the allocation of the 13 senate seats to Banaadir, the new electoral timelines and the number of polling stations in every Federal Member State.

The September 2020 agreement mentions two towns in each FMS but the CPC has demanded it be reduced to one owing to logistical and time constraints.