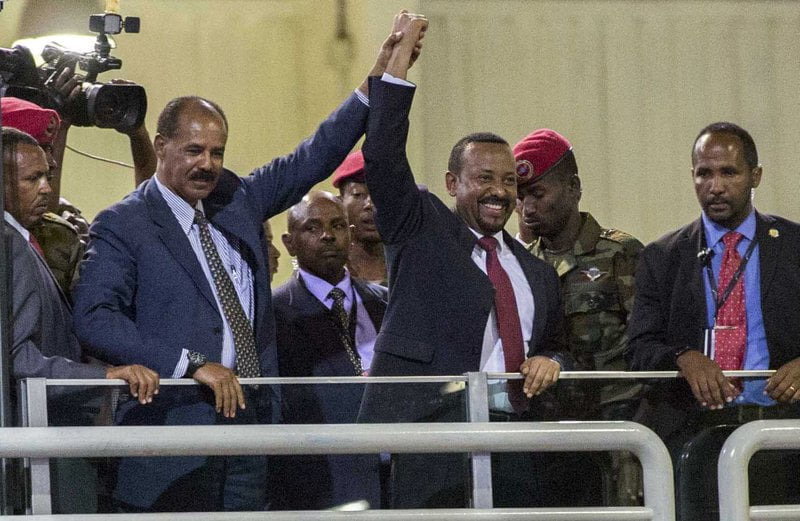 “You are our leader!”

It is important to remember that when President Isaias made his first visit to Addis Ababa in July 2018 to meet Prime Minister Abiy he made remarks that left most Eritreans speechless.

He told Abiy “you are our leader” and announced happily to the crowd: “I’ve given him all responsibility of leadership and power”.

But how did this come about? How did Eritrea, which fought from 1961 – 1991 for its freedom and independence from Ethiopia, come to consider a federation with its former enemy?

Towards an Ethiopian-Eritrean Federation

On 8–9 July 2018 Prime Minister Abiy visited Asmara to seal the peace between Eritrea and Ethiopia.

In just over two years President Isaias and Prime Minister Abiy made nine official visits to each other’s capitals, or went on joint delegations to other states – Saudi Arabia and the UAE.  Other meetings were held by senior officials from both countries.

Critical meetings took place in the run-up to the outbreak of war in Tigray:

On 4 November 2020, just three weeks after Isaias’s visit to Bishofu, the Tigray war broke out.

Just prior to the conflict erupting in Tigray President Isaias brought his closest political and military advisers together for an intense discussion on how to proceed.

The president told them that the country had to accept that it has a small and not very viable economy and a lengthy Red Sea coast, which Eritrean cannot patrol on its own.

He is reported to have suggested that some sort of “union” with Ethiopia might be possible, at least in terms of economic co-operation and maritime security.

In so doing Isaias echoed Prime Minister Abiy’s dream of re-establishing the unity of Eritrea and  Ethiopia. Part of this vision involved a potential Ethiopian Navy.

Re-establishing the Ethiopian Navy in Eritrea

In Marcy 2019 France signed an agreement to re-build the Ethiopian navy, as Reuters reported.

“On a four-day visit to the Horn of Africa, President Emmanuel Macron is looking to break from France’s colonial history on the continent and nurture relationships in a region where it has lagged behind in recent years.

Macron wants to leverage a mixture of Paris’ soft power in culture and education and its military know-how to give it a foothold at a time when Ethiopia is opening up.

“This unprecedented defence cooperation agreement provides a framework… and notably opens the way for France to assist in establishing an Ethiopian naval component,” Macron told a news conference alongside Prime Minister Abiy Ahmed.”

Prime Minister Abiy Ahmed said on state TV: “We built one of the strongest ground and air force in Africa… we should build our naval force capacity in the future.”

In 1955, the Imperial Ethiopian Navy was founded, with its primary base—the Haile Selassie I Naval Base—in the Eritrean port of Massawa. By the early 1960s workshops and other facilities were under construction at Massawa to give it complete naval base capabilities. 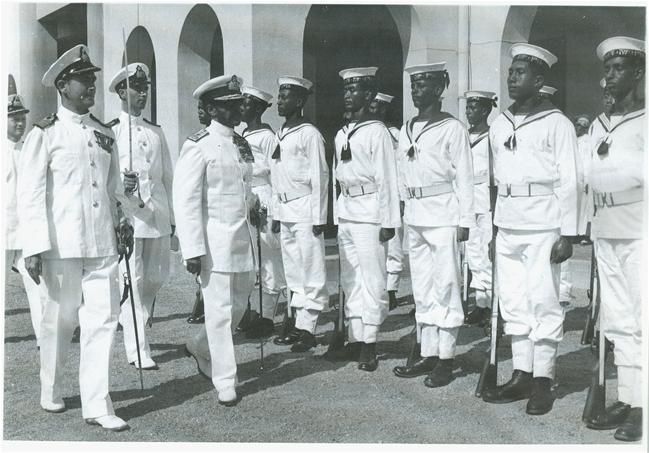 The Imperial Ethiopian Navy established four bases: Massawa was the site of the naval headquarters and enlisted training facilities; the naval air station and naval academy were at Asmara; Assab was the site of a naval station, enlisted training facilities, and a repair dock; and there was a naval station and communications station on the Dahlak Islands in the Red Sea near Massawa.

“Ethiopia’s right to use international waters demands it has a naval base,” he told the BBC’s Newsday programme. The plan, Mr Birhanemeskel said, was to push for the “unification of the Horn of Africa as an economic bloc and the navy is part of that project”.

As soon as the Tigray is stable again then President Isaias could reopen the border between Eritrea and Ethiopia once more.

Re-opening the border between Ethiopia and Eritrea did take place after the peace deal was signed in 2018, to the enormous economic benefit of both nations.

Federation would also facilitate the development of the Danakali potash deposit – one of the world’s largest. 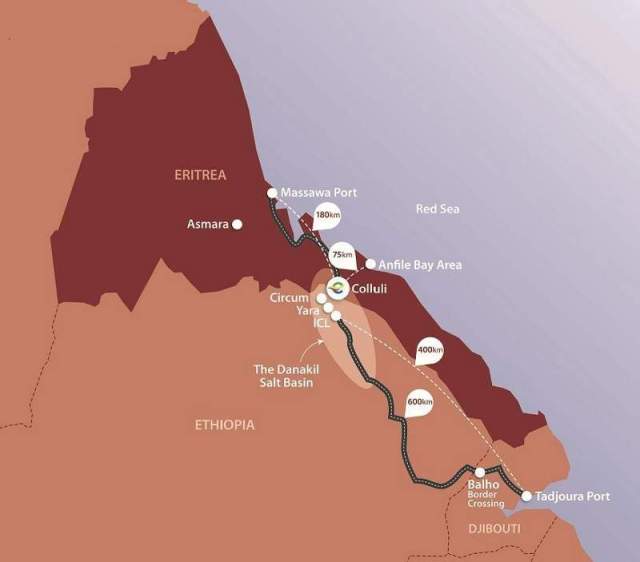 The trade magazine, Mining. Com provided this analysis of the scheme in January 2019.

“The project location has its pros and cons. On one hand, being so close to the Red Sea coast, makes it one of the world’s most accessible potash deposits, with mineralization beginning at 16 metres, which also makes it the world’s shallowest. Additionally, its proximity to ports will provide easy access to Asian markets.

Colluli is also by the border with Ethiopia, with which Eritrea held one of Africa’s deadliest border wars. In June 2018, the ruling coalition of Ethiopia (Ethiopian People’s Revolutionary Democratic Front), headed by Prime Minister Abiy Ahmed, agreed to fully implement the peace treaty signed with Eritrea in 2000, with peace declared by both parties in July 2018.

Colluli contains at least 1.1 billion tonnes of potash, enough for at least 200 years of production, according to the latest figures published by the company.”

Developing this resource would naturally be of enormous benefit to both Eritrea and Ethiopia. But establishing a new port in the Anfile bay area would be very costly. A federation of the two countries would make this much easier.

The all of the Horn of Africa would prosper and political stability would follow. Is this a dream?