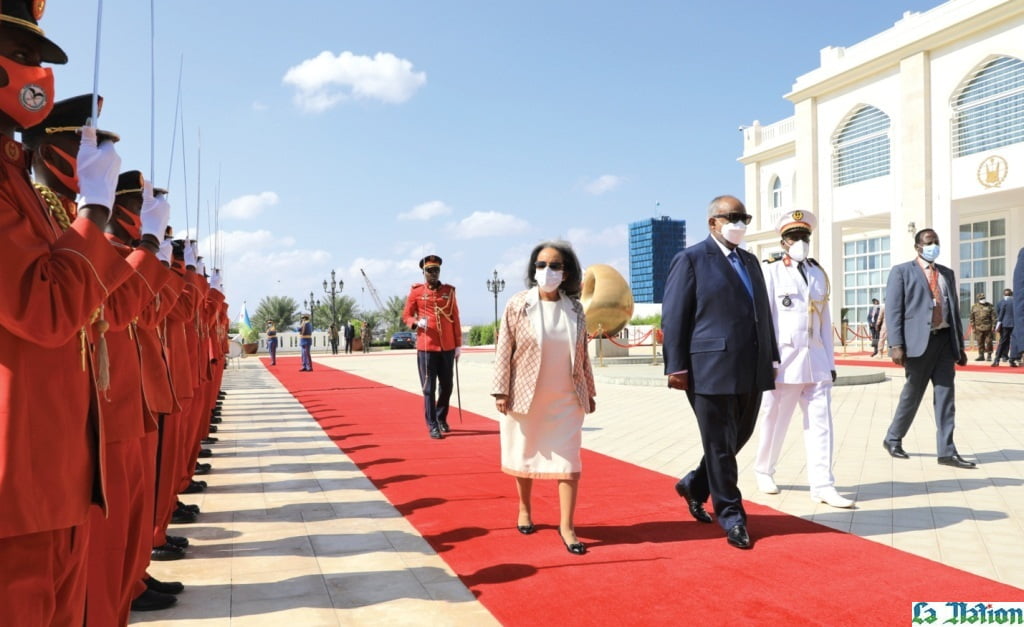 The Head of State of Djibouti, His Excellency Ismail Omar Guelleh and his counterpart from Ethiopia, Mrs. Sahle-Work Zewde, reiterated the common will of their countries to continue the process, tinged with success, integration and complementarity characterizing their savings.

The two Presidents made this statement during a press briefing following a one-to-one interview, the main stage of the 48-hour official visit that, at the head of a high-level delegation, Ms. Sahle- Work Zewde has been performing since Sunday morning in Djibouti. “We intend to extend the complementary relationship that exists between our two countries to all sectors of activity,” said the Djiboutian Head of State.

“The successes recorded must, more than ever, serve as a dynamic for the extension of partnerships in all areas of common interest for the two countries and the two peoples”, he continued, welcoming “the determination of shows the two nations to preserve and promote the privileged and integrated nature of their economies and superior interests ”. “The attachment of our country to the stability and unity of Ethiopia is also in line with the community of economic destiny that we are forming with this brother and neighbor country”, he said. he underlined before welcoming “the reestablishment of constitutional order in Tigray”.

And the Head of State to deprive the last word of his intervention in a vibrant tribute to the Ethiopian President.

“In addition to being a well-known and appreciated personality in Djibouti, our country will never cease to carry Ms. Sahle-Work Zewde in its heart for the precious support and unwavering commitment that she has always been able to bring to the achievement of the perfect synergy which today characterizes Djibouti-Ethiopian relations. ”

She praised the “privileged cooperation links between the two countries. “She said” her country’s attachment to the pursuit and strengthening of exceptional development partnerships with the Republic of Djibouti. “

She describes “the complementary nature of the Djibouti-Ethiopian economies and businesses as an inspirational model for the integration of other regions of the Black Continent”.

Ms. Sahle Work Zewde also took advantage of this intervention to relay the “thanks of her country to the Republic of Djibouti.

“We are grateful to your country which was the first nation to provide us with support within the framework of the now completed operation relating to the reestablishment of constitutional order in the Tigray region,” she declared.

And the Ethiopian President reiterated “the determination of her country to ensure the preservation of the strategic and unique partnership that it forms with the Republic of Djibouti.”

The reception of Mrs. Sahle-Work Zewde at the Palace of the Republic included, in addition to the face-to-face meeting with the Head of State, a working audience extended to delegations from both parties.

The members of the delegation accompanying the Ethiopian President and who took part in these talks included, among others, the Ethiopian Minister of Transport, Ms. Dagmawit Moges.

Note also the presence at this audience of the Ambassador of the Democratic and Federal Republic of Ethiopia to the Republic of Djibouti, His Excellency Birhanu Tsegaye.

On the Djiboutian side, in addition to the Minister of Foreign Affairs and International Cooperation, Mr. Mahamoud Ali Youssouf, his colleague from Equipment and Transport, Mr. Moussa Mohamed Ahmed, the Ambassador of the Republic of Djibouti to the Democratic and Federal Republic of Ethiopia and Permanent Representative of Djibouti to the African Union, Mr. Mohamed Idriss Farah, took part in this meeting.

The reception of Ms. Sahle-Work Zewde at the Palace of the Republic was crowned by an official lunch that the Head of State, His Excellency Ismail Omar Guelleh, offered in honor of the President of Ethiopia and the important delegation accompanying him.

Tomorrow Monday, the second day of her official visit to Djibouti, the Ethiopian President will be the distinguished guest of the National Assembly where she will deliver an important speech in the hemicycle.

A sign of the privileged and exceptional character of Djibouti-Ethiopian relations, the President of the Republic, His Excellency Ismail Omar Guelleh and the Ethiopian Prime Minister, Mr. Abiy Ahmed Ali had yesterday, at the beginning of the evening, telephone interviews where they spoke. discussed together the reestablishment of constitutional order in the Tigray region and the common will of the two countries to work to strengthen relations of solidarity and complementarity between the two countries and the two brotherly peoples, friends and neighbors.