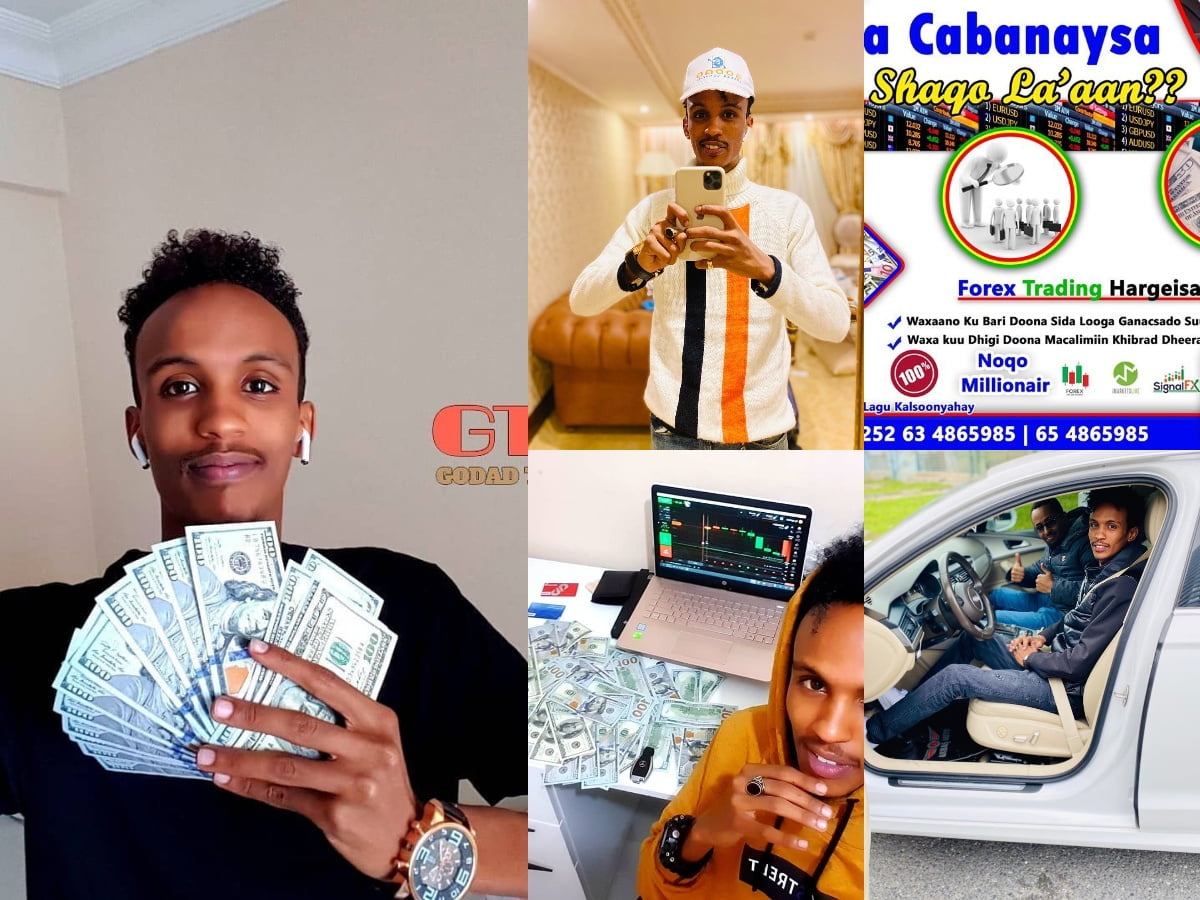 On February 19th, the Somaliland Central Bank has issued a warning about get rich quick schemes involving forex currency or other online trading activities that promise astronomical returns and a life in the lap of luxury.

Prior to the Central Bank’s warning to consumers to stay away from these schemes, on February 16th the Marodijeh Regional Court ordered the restriction of bank accounts of Godaad Trades, Hargeisa Forex and one Abdishakur Sh. Muse Jama Goodaad. Two of which seem to be related to the same entity of Godad Trades.

Despite the warning from the Somaliland Central Bank that labelled these businesses essentially a scam to defraud investors and the freezing of the bank accounts, we found that at least two of them, Hargeisa Forex and Godad Trades to be still fully operational in Hargeisa, Somaliland.

Speaking to Mr. Khadar Mohamed Yusuf Adan who answered the phone number listed for Hargeisa Forex, he has been kind enough to explain how the operation works in the most arcane way possible highlighting the riches that some people have already made trading foreign currencies while barely mentioning the risks involved.

US Securities and Exchange Commission, the regulatory agency that polices the banking and trading industry describes the extreme risk of forex trading “The risk of loss for individual investors who trade forex contracts can be substantial”.

Mr. Adan explained that his firm, Hargeisa Forex currently has two service offerings, one is educational path for potential investors on how Forex trading works and prepare them to self-direct their portfolio and trading activities, the second is a fully managed Forex account that will use a Percentage Allocation Money Module or PAMM account.

Mr. Adan who has acknowledged the challenges the Forex trading companies like his currently face from the Somaliland Authorities, explained that the big banks in Somaliland who see them as a threat are using the government due to drain in their deposits from people who want to invest in Forex trading. In other words, the big banks are facing a stiff competition from Forex firms that they have resorted to bringing in the government to shut them down.

Highlighting how lucrative the forex trading can be, Mr. Adan stated that he personally knows someone who has made $20,000 US dollars from just a hundred bucks of course after loosing a measly 200 dollars in the beginning. He has also explained that he has heard of major Somaliland businessmen who have brought in foreigners to invest in the same schemes and have turned 100,000 dollars into 15 million in few short years.

A common trait among those promoting forex as a way to become wealthy for the unemployed or underemployed youth in Somaliland and more so in Somalia is the use of slick video advertisements complete with fast cars and a plethora of numbers and graphs designed to create an image of success.

While Hargeisa Forex is small and operates from a small car rental business next to Safari Hotel in Jijiga yar, Godad Trades occupies a lofty two story villa in Badda Cas suburb and is also very much operational.

The most notorious of these traders is Godad Trades, its owner, Mr. Abdiqani Sh Muse Godad who appears to have stepped out of a rap video with his trademark shaggy hair, cash and multiple credit cards casually spread on the center console of his European Audi or on his desk where ironically the laptop on the same table shows a trading app.

Mr. Godad does not behave like a typical securities broker and is eager to flaunt his success on social media as a way to attract potential investors.

On his Youtube Channel Mr. Godad gives lessons on how to trade but mostly touts his own success by repeatedly stating that he will share the secrets of his transformation.

Mr. Godad’s lessons on trading, the riskiest and bottom of the barrel instruments in the financial market such as forex and digital options, also known as “all-or-nothing options” sounds like a motivational or a personal coach who is intent on tapping into your inner confidence to follow his path and trust him with you money but not much in terms of substance on how these instruments actually work.

When we visited Godad Trades office, a group of young men were gathered in the foyer of the two story villa with an armed guard also present in the courtyard. A chat one of them who identified himself with only his first name explained how the venture works and that a minimum of one thousands dollars with a 20% fee is required and that within 40 days an investor will receive a 100% profit.

When asked how an investor will transfer funds to Godad Trades he quickly explained that only cash is accepted but the proceeds can be deposited to any type of account an investor chooses. There was no mention of any risks involved and was happy to inform us that there is no limit on how much one can invest and the more they invest the higher the return.

Search through multiple jurisdictions including Turkey where Mr. Godad seems to be operating from for a licensed stock broker or a financial adviser that matches Mr. Godad’s name where unsuccessful. It is highly unlikely that any of the entities targeted by Somaliland authorities employ licensed stock or other securities brokers and while there are a lot of anecdotes of people making money hand over fist from forex ventures, we are unable to locate anyone who has made money with these these companies.

There are clear warning signs that point to the illegitimacy of these businesses that would make any knowledgeable investor run for the hills but one of the most alarming is the promise of 100% return rate and the fact that they only accept cash from potential investors.

It is very likely that these sophisticated conman are not doing any trading but are rather engaged in a simple ponzi scheme where new investor money is given to few old investors to lure in more unwitting clients with the hope to relief many of their hard early money.

Although Somaliland government has acted against these companies in force, existing laws are too antiquated to keep up with modern financial crimes that involves multiple jurisdictions and use of intermediaries’ accounts to transfer money from customers.

Central Bank of Somaliland officials did not respond to questions for this article related to the number of current customers that have invested with these companies, the warning they have issues about these schemes and if there was any other enforcement action underway beyond the warning to protect current and future investors.