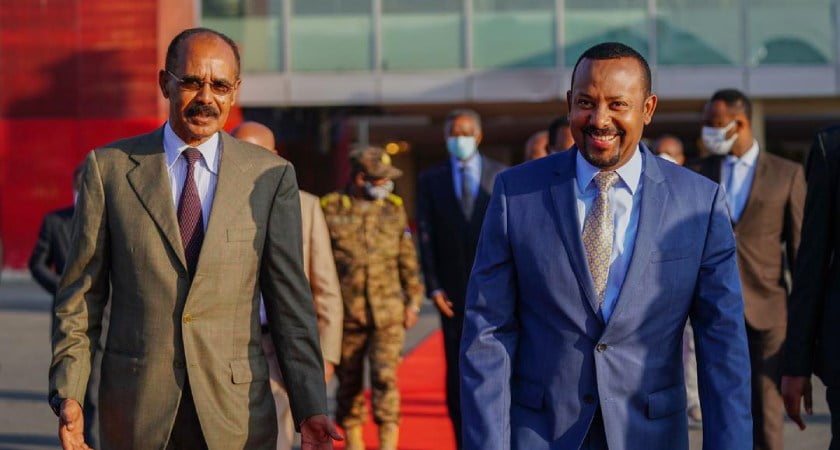 Needless to say, the rapid thawing of relations between Ethiopia and Eritrea in the last couple of years has triggered a landslide of speculation as to how this improved relationship could reshape the economic landscape of the region.

By the same token, these developments in the relationship were expected to result in significant impact on trade, investment, and shipping in the Horn of Africa. None of these assumptions was wrong. Leaders of the two countries are cooperating to further enhance their economic relations thereby augmenting to integrated development endeavours in the horn region.

The economic accords reached between Ethiopia and Eritrea so far were profound as they predominantly aim at fostering growth and development between the two countries. President Isaias Afwerki of Eritrea, who visited various mega development projects including the Grand Ethiopian Renaissance Dam (GERD) earlier this week, has endorsed his solidarity and support to Ethiopia’s development endeavors.

In essence, Ethiopia and Eritrea are economically indivisible. Even during those days when Eritrea seceded from Ethiopia in 1991 and formally becoming sovereign in 1993, the economic relation between the two countries remained unbreakable due to people-to-people ties until 1998 when war broke out and formal economic ties ended.

Pre-war economic integration between the two countries included a free-trade area, a partial customs union, and currency and monetary unions. The Eritrean port of Assab used to handle about 90% of Ethiopia’s exports before the Ethiopian-Eritrean border war erupted in 1998.

Following the flagship move of Prime Minister Abiy Ahimed two years ago, which ended decades of political and military impasse, a new era of people and economic integration was heralded once again between the two countries. This is a breakthrough which laid a foundation to peace and economic integration in the horn. Under the leadership of Nobel Laureate PM Dr. Abiy Ahimed, Ethiopia became highly enthusiastic to strengthen the diplomatic and economic relations with Eritrea through people-to-people ties.

To highlight some of the progressive measures already undertaken between the two governments so far, flights between Addis Ababa and Asmara have resumed, phone connections have been restored, and there have been talks about new transportation and infrastructure projects that would reopen Ethiopia’s former path to the sea.

It is recalled that President Isaias and Prime Minister Abiy pledged to restore diplomatic relations and open their borders to each other at a summit on July 8, 2018 in Asmara. The next day, they signed a joint declaration formally ending the Eritrean-Ethiopian border conflict. Another peace agreement was signed in Jeddah, Saudi Arabia on 16 September later that year. Ethiopia shares borders and communities with Eritrea; and hence sharing similar opportunities and challenges in the Horn of Africa.

What happens in Ethiopia could affect Eritrea and vice versa and if the two countries put the relations in strong people-to-people base, the diplomatic and economic ties would surely thrive. Against the back drop, the cooperation agreement signed between the two nations will have a paramount role in every arena of life, be it economic, social or political.

The agreements are predominantly economical. There are ample trade relations that have started since the onset of the economic relations between Ethiopia and Eritrea. Consensus was reached to ensure Ethiopia’s seamless use of Eritrean ports, the detail would be prevailed after the agreements signed by leaders of the two countries.

The two countries have been executing their share for a speedy utilization of Eritrean ports of Massawa and Assab. Currently, it is estimated that the port facilities in Djibouti handle 97 percent of Ethiopia’s imports. The newly commenced economic relation between the two countries will provide an alternative gateway to Ethiopia by easing up the huge shipping burdens on Djibouti port; not mentioning its benefit to increase government revenues and catapulting economic growth of Eritrea.

In a nutshell, the Ethio-Eritrea normalization declared a new era of cooperation in the Horn of Africa and the two countries have done exemplary tasks to solve the two-decade standoff without the third party involvement. Solving problems by their own also helped Ethiopia and Eritrea to jointly work and enhance relations with different countries. After solving the problem with Eritrea, Ethiopia has played a helpful role in supporting the latter’s efforts to enhance relations with Djibouti, Somalia and Sudan.

Regional peace is the most important factor in economic integration in the horn. As a leading role player in the IGAD, Ethiopia played a precursor part in diplomacy by easing up empirical problems revolving around Eritrean relation with the rest of the nations in the region.

Intra-African economic integration through infrastructure development and environment, private sector-led intra-African Trade and sustainable utilization of natural resources are some of the most significant and flagship economic integration directions given prior attention by the African Union. Economic integrations between regional countries are literally acclaimed to be vital and ideal instruments to bring peace, mutual development through proliferation of trade and investment, inter alia, thereby contributing a great deal to economic growth of Africa as a whole.

Speaking from a regional and continental perspective, there are many regional integration schemes in Africa, which are at different levels of integration. Among which, the Common Market for Eastern and Southern Africa (COMESA) is the one; where Ethiopia is included. In fact, Ethiopia is a founding member of the COMESA.

The country is working hard for possible political and economic cooperation with all its neighbouring countries; though it is one of the few nations in the region which has not yet entered into the Free Trade Area. In spite of the pending issues to fully integrate its economy with the regional bloc, there is an appreciable level of transactions of Ethiopia with other COMESA member states.

On the other hand, though Eritrea is also a member of the COMESA, the market share it holds with the COMESA member countries is still rudimentary. Eritrea has a very large subsistence agriculture sector, though agriculture contributes to about 17% GDP. Though the country is endowed with mineral wealth, it has been facing various economic challenges.

The manufacturing sector is relatively small only contributing to about 6% GDP, and services sector close to 60% GDP. Global remittances are an important source to Eritrea’s economy. Therefore, Eritrea and Ethiopia has a lot to work together so as to improve their market shares in the COMESA member countries. As a matter of fact, Ethiopia stands relatively better off in terms of market share and the trade balance in the COMESA market, by and large, shows no significant trade deficit over the years.

One thing worth mentioning here is the paramount role being played by Ethiopia augmenting regional integration endeavors through the construction of the GERD. The GERD, when completed, would be like an El Doradoto catapult the rapid transformation of the continent and bring about regional economic integration. This hydroelectric dam plays a tremendous role in integrating the horn by providing access to renewable and greener electric power to neighboring countries including Eritrea.