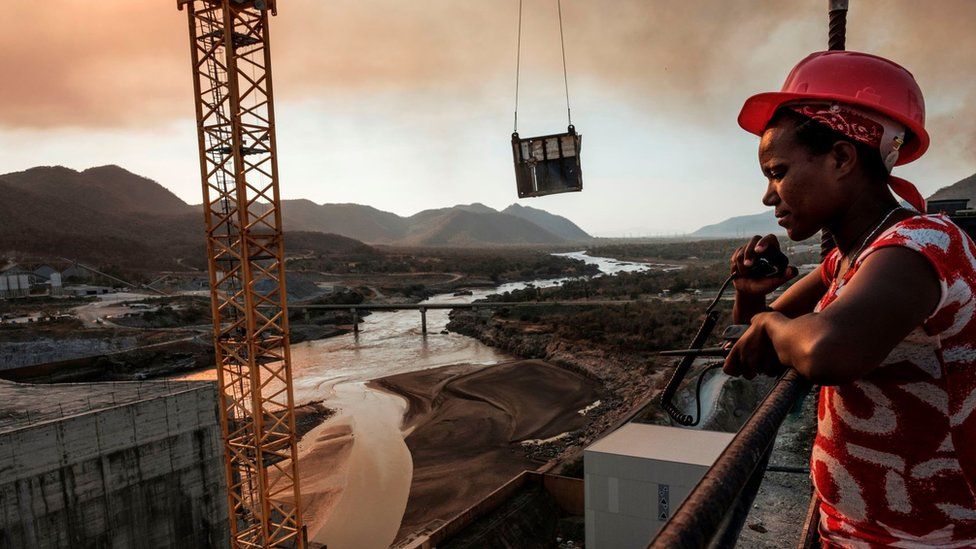 Sudan is caught in the middle of a decade-long row between Ethiopia and Egypt over the dam Ethiopia is building on the River Nile and in recent months it has undergone a major shift in attitude, as Zeinab Mohammed Salih from BBC reports from Khartoum.

When discussing the Grand Ethiopian Renaissance Dam (Gerd), Sudan’s rhetoric has moved from being broadly welcoming to being suspicious and belligerent.

This change, in large part, reflects the increasing influence of the military in the transitional government that is supposed to pave the way to a democratic system after the overthrow of long-serving leader Omar al-Bashir.

The diplomatic temperature has increased as Ethiopia’s rainy season approaches and the reservoir behind the dam will fill up for a second year without any agreement on how it should be done. 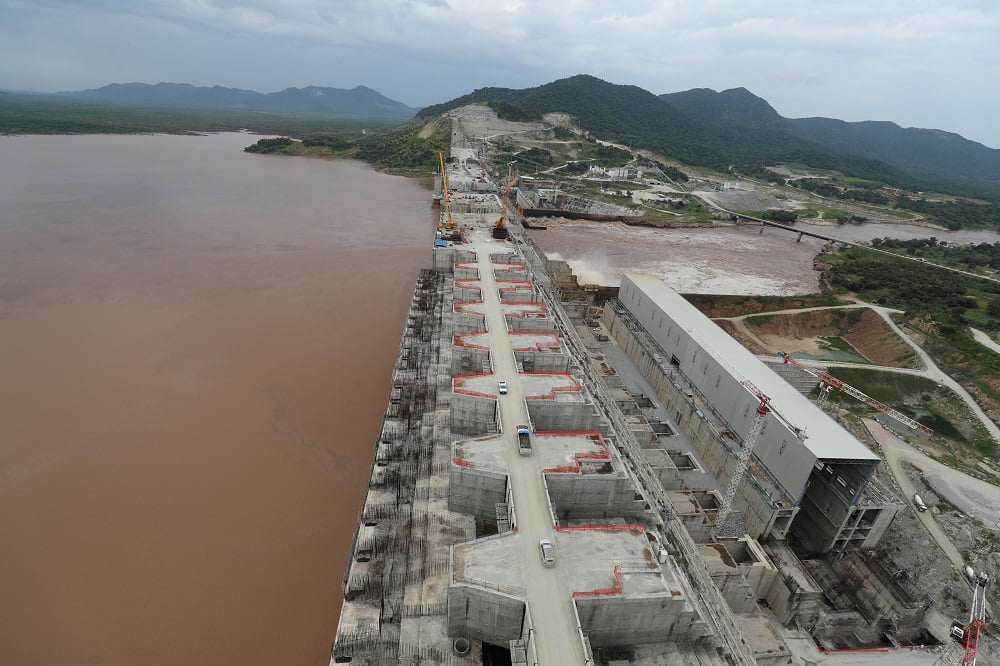 Both Ethiopia and Egypt have spoken about the project in existential terms.

Ethiopia says the Gerd is vital for its development as it could bring power to 60% of the population. Egypt says it threatens the flow of the Nile which sustains life there.

Sudan, which sits on the river between the two countries, has now taken to issuing dark warnings itself.

An advisor to the head of Sudan’s sovereign council, Lt-Gen Abdel Fattah al-Burhan, spoke of a water war “that would be more horrible than one could imagine” unless the international community helped find a solution.

Shift in the balance of power

Rewind 14 months and very different noises were coming from the capital, Khartoum.

While acknowledging a small number of issues to be ironed out, he said the Gerd would make the flow of the Nile more predictable and could introduce a third farming season.

The dam could also mean cheaper and more reliable electricity for Sudan, which recently suffered power cuts for 12 hours a day.

But earlier this month, following the failed African Union-brokered talks between, Egypt, Ethiopia and Sudan in Kinshasa, Mr Abbas told journalists that it would threaten national security if Ethiopia filled the dam without solving the outstanding issues. 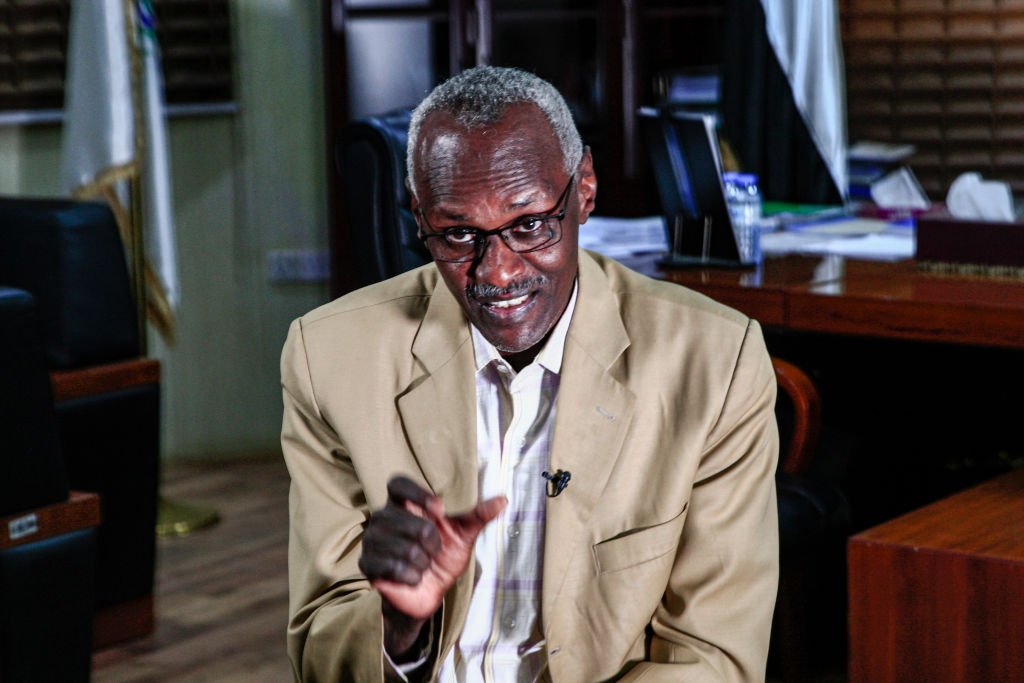 Without an agreement, the Gerd is really a threat to the people downstream… both the environment and the livelihoods of the people”Yasir Abbas Water Resources Minister, Sudan

Sudan wants Ethiopia to commit to a legally binding agreement, rather than guidelines, on the amount of water retained and the timetable for filling the reservoir. It also wants clarity on how disputes will be resolved in the future.

“Without an agreement, the Gerd is really a threat to the people downstream… both the environment and the livelihoods of the people,” he added.

He argued that Sudan would suffer more than Egypt if filling the dam reduced the amount of water flowing into Sudan, as Egypt has a large reserve of water sitting behind its own Aswan dam.

‘Raising a stick to Ethiopia’

This has all been known for a long time. What has changed is a shift in who holds the balance of power between the military and civilians in the post-Bashir transitional administration.

Any potential threat to national security now trumps other considerations. In addition, growing tension between Sudan and Ethiopia over a border dispute in an area known as al-Fashaga has made Sudan less inclined to favour Ethiopia.

The exact boundary in the area between the two countries had not been demarcated and despite colonial-era treaties suggesting that al-Fashaga was part of Sudan, Ethiopians had been living there and paying taxes to the Ethiopian authorities.

In 2008, a compromise was reached in which Ethiopia acknowledged it was part of Sudan, but Ethiopians continued to live there.

Sudan, however, took advantage of Ethiopia being distracted by the conflict in Tigray last year and moved troops into al-Fashaga.

The government launched a big campaign to get people to support military action in the area. This included taking influential people to the border and pop stars in military uniform performing in Khartoum.

In the north of Sudan, the air force has been carrying out joint training operations with Egypt.

“It’s very clear that they are trying to raise the stick to Ethiopia,” retired brigadier Mahmoud Galender told the BBC.

For its part, Ethiopia continues to try and reassure Sudan that the Gerd will not damage the country.

He also talked about sharing information about what is happening ahead of this year’s rainy season.

These words though may not be enough to placate Sudan or Egypt as a push for further negotiations continues.

Egypt’s Foreign Minister Sameh Shoukry is currently on a tour of the continent to win allies in Egypt’s bid to find a legal solution “on the operation and filling of the dam in a manner that takes into consideration the interests of the three countries”, a statement from the Egyptian government said.

Sudan’s Gen Burhan had a similar message in a TV interview last week.

As the diplomatic pressure increases, time is inevitably ticking and once the rains begin later this year the reservoir could fill up whether there is an agreement or not.