UN Appeals for Ethiopia Detainees for Help in Saudi Arabia 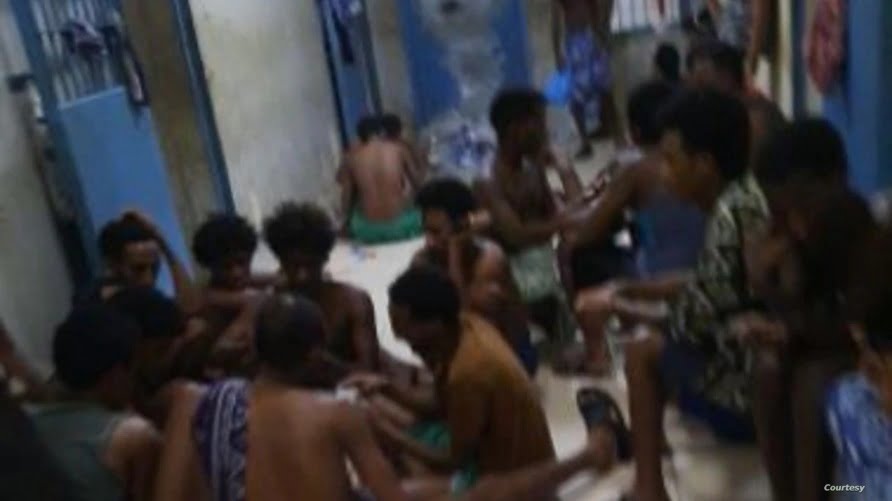 The prospect of paid work and better lives lured Teshome and Kadir from their native Ethiopia, their hopes pinned on Saudi Arabia. Instead, the two young men have spent at least five months idled and anguished, confined in one of the kingdom’s migrant detention centers.

They fear they’ll never get out alive.

“Our situation is above that of the dead and below the living,” Teshome, 21, told VOA in phone interviews from a center in the Saudi port city of Jizan. Complaining of meager rations of rice, bread and water, no bedding, and crowded, unsanitary conditions, he added, “Many of us are getting sick, and some have passed away.”

VOA’s September 2 interviews with Teshome and 30-year-old Kadir echo those of recent reports. In mid-August, Human Rights Watch reported that at least hundreds, and perhaps thousands, of Ethiopians were being held in Saudi Arabia, in part because of pandemic concerns.

U.N. Migration (IOM) issued a statement Tuesday amplifying the detainees’ appeals. Saying it was “alarmed by the deteriorating situation of Ethiopian migrants detained” in Saudi Arabia, IOM called for urgent action, including access to humanitarian aid to ensure migrants’ safety.

“We cannot stress enough the importance of considering detention only as a very last resort,” IOM said, “and of improving conditions in immigrant detention.”

The Ethiopian migrants are among millions of foreigners, mostly from South Asia and Africa, who sought jobs in the oil-rich kingdom. As the London-based Sunday Telegraph noted in an August 30 report on detention conditions, some 6.6 million worked there as of June 2019, largely in low-wage positions involving domestic work, construction or other physical labor.

But migrants have been perceived as possible COVID-19 carriers. Weeks after the World Health Organization’s March 11 declaration of a pandemic, armed Houthi rebels in northern Yemen chased off thousands of Ethiopian migrants to the border of neighboring Saudi Arabia, killing dozens as they fled, according to testimony collected by Human Rights Watch.

Teshome and Kadir, whose real names are being withheld to protect them from possible retribution, were among those detained. They told VOA they had hoped to find work after paying traffickers to help them travel from Ethiopia to and through Yemen.

Riyadh deported nearly 3,000 Ethiopians in the first 10 days of April, The Telegraph reported. Almost 200,000 others were scheduled to follow suit, but the United Nations — in an internal memo leaked by Reuters news agency April 13 — asked the Saudis to suspend mass deportations to reduce the risk of spreading COVID-19.

Ethiopia’s Foreign Ministry said in a September 3 news release that 3,500 of its citizens had been repatriated from Saudi Arabia from April to July. Human Rights Watch told VOA these were among the most vulnerable migrants, including children and pregnant women, but said that women with small children had remained in detention.

On Thursday, Foreign Ministry spokesperson Dina Mufti told VOA that another 274 of the Ethiopian migrants had been returned to Addis Ababa earlier in the week, with another 1,440 expected by October 5. He said repatriations would continue afterward.

Mufti did not disclose how many Ethiopian migrants remained in Saudi detention.

“The number is fluid,” he said.

He also emphasized the enormity of reaching other migrants in the Mideast, then transporting and quarantining them amid the pandemic. Ethiopia, he said, was committed to bringing home its citizens.

The Saudi government did not answer any of several VOA requests for comment, including on conditions in its detention centers. Those conditions — described separately to VOA and other news media by detainees using encrypted channels — include accounts of physical and mental strain.

In the wake of negative publicity, detainees have reported that their phones are being confiscated, and that Ethiopian envoys have warned them against sharing their stories.

“I have not worn clothes for six months — it is too hot in here. We are dehydrated,” Teshome told VOA. At night in the Jizan facility, several hundred men sleep on the tile floor “just in our underwear, and even then, the heat is unbearable.”

Kadir scanned the room with Teshome’s phone camera, providing a glimpse of partially dressed men huddled on the floor or leaning against the wall. Small windows near the ceiling let in light and possibly ventilation, but not much of a view.

When toilets overflow, detainees “beg the guards to open the door just to get air,” Teshome said. “If we step out, they beat us.”

“Imagine being in a room with 360 people, not getting fresh air at all for months,” Kadir later added.

Kadir said many of the migrants have developed a mysterious facial rash.

“We’re worried we’re all going to get it,” he said, lamenting what he called a lack of health care.

Kadir said he and other migrants were tested for COVID-19 after being transported to the Jizan facility but were not told of any positive cases. He added that given the crowded conditions, “If one of us had the virus, we all would by now.”

It was unclear, without comment from Saudi officials, whether COVID-19 has been diagnosed at Jizan or any other Saudi migrant detention center. The kingdom had recorded slightly more than 328,000 cases and 4,399 deaths nationwide as of Thursday, according to Johns Hopkins University researchers. Ethiopia had nearly 67,000 cases and 1,060 deaths.

Some Jizan detainees have grown despondent. Teshome and Kadir said one young man hanged himself in the bathroom, using his marto or traditional wrap as a noose. Since then, detainees have been more vigilant in checking on each other, the two men said.

Ethiopian detainees also have complained, to VOA and other news outlets, of verbal abuse and physical beatings.

Referring to Saudi Arabia’s oil wealth, she added, “We’re talking about a country that can have the resources to do something about it.”

But Ethiopia’s Foreign Ministry, in its news release, offered thanks, not criticism, to Saudi Arabia “for the outstanding support extended to our citizens in general, and Ethiopian irregular migrants, in particular. The Ethiopian mission staff lends a hand when different problems arise and works with the Saudi authorities to resolve them,” the news release said.

“We are not doing enough,” the Ministry said.

IOM estimates that, since 2017, at least 400,000 young Ethiopians have crossed to the Arab Peninsula seeking jobs, sometimes encouraged by Saudi recruiters or brought by human traffickers. An IOM study released in May found that at least a third of young Ethiopian migrants seeking work in Saudi Arabia underestimated potential hazards along the so-called Eastern Route to the Middle East, including the risk of boats capsizing in water crossings and of encountering the armed conflict in Yemen.

Teshome came from Ethiopia’s northeastern province of Wollo. The 21-year-old said his family helped him cover the traffickers’ fee of almost 70,000 Ethiopian birr, or $1,900, to get to Saudi Arabia. In Yemen, smugglers demanded more money to complete the journey, so Teshome’s relatives obliged — before the Houthi rebels disrupted his plans, sending him fleeing. He said his family still doesn’t know he is in Saudi detention.

“I took the risk and it didn’t work,” Teshome said. “At this point, I just want to go home to my parents.”

Kadir left his home in the Oromia region’s East Harerge zone six years ago and got as far as Yemen before running out of money. He did odd jobs such as washing cars. But as Yemen’s conflict dragged on, he refocused early this year on Saudi Arabia. He paid a smuggler but was abandoned before a river crossing. He wound up in a group of at least 200 migrants, walking by night to elude the rebels on the way to the kingdom. Then he, too, was taken into the Saudi’s migrant detention.

“I regret leaving my country,” Kadir said. “If I knew then what I know now, I never would have left my home. I’d rather die there than live here in this inhumane condition.”